The Republic of San Marino

Ever since I learned about them in 7th grade geography class, I’ve been drawn to the little countries like Monaco, Liechtenstein and the Republic of San Marino.  Some of the allure is doubtless from association with silly romantic visions of such places in movies like The Mouse That Roared, The Prisoner of Zenda or Pottsdorf in The Great Race.  But the Republic of San Marino is a real country, and it’s not far from Bologna, so last week we spent a night there. 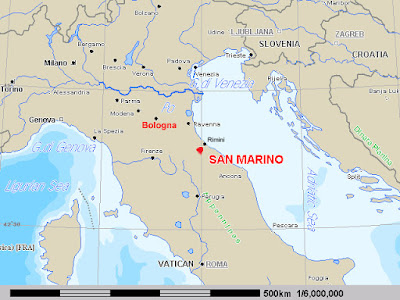 San Marino is the oldest surviving sovereign country (from 301 AD) and constitutional republic (from 1600) in the world.   It is completely surrounded by Italy—24 square miles of territory a few miles inland from the coastal resort town of Rimini, centered on a craggy outcrop that rises about 2400 feet above sea level.  The aerial view below shows about all of San Marino that I’d ever seen pictured—the top of Mount Titano with its three towers, and the capital city.  But as we discovered during the bus trip up from Rimini, most of the country is on the lower slopes, and much of it looks no more appealing than other modern urban developments.  We were glad when the bus continued right on up. 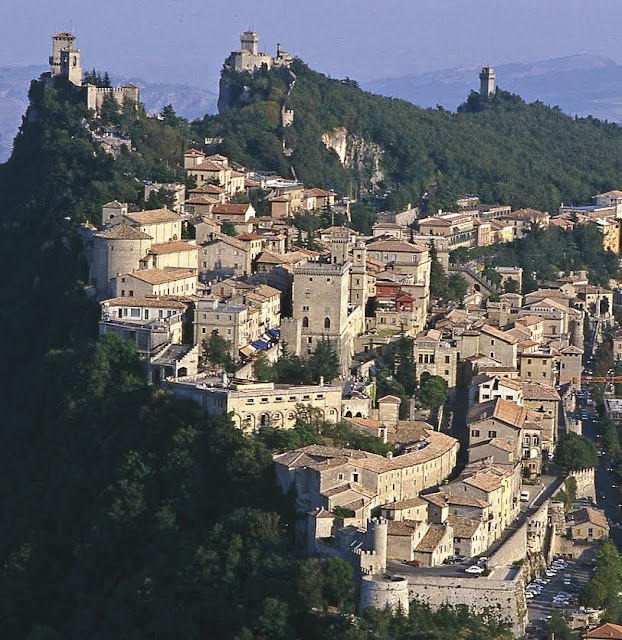 As you can probably tell from the photo above (borrowed from a publicity brochure), there isn’t any natural level ground in the capital city, so the streets and lanes make a series of intersecting switchbacks up the side of the mountain.  As we made our way on foot up and up to reach our hotel we discovered another unsuspected aspect of San Marino:  nearly every shop in town is aimed at the tourist trade, whether in the form of cheap and gaudy souvenirs or leather handbags or jewelry or reproduction weapons or food.  The most alarming things for sale were perfect plastic air-gun-version reproductions of handguns and automatic weapons—the kind of thing that would get you arrested on suspicion or worse in most big cities.  The town was loaded with tourists of all ages, many of whom arrived for the day in the typical luxury motor-coaches found throughout Europe.  Many buses carried I.D. cards in the windshield written in cyrillic script (many stores had signs to match), and hearing lots of Russian (or something like it) spoken on the street it seems that a surprising percentage of visitors come from Croatia or further to the east and north.
While the shops and their patrons were not without entertainment value, we spent much of our time visiting the historical sites and edifices, including the government building and the basilica.  But most engaging were the three towers that appear (with feathers on top) on the coat of arms. 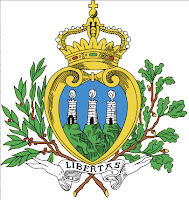 Two of these are parts of 13th-century fortresses that have been maintained and rebuilt as necessary over the centuries, and they are open to explore, sometimes with more freedom than one would expect.  Aside from the castles themselves, the views from the ramparts and towers are magnificent, out over the Adriatic Sea to the east and the Apennine mountain range inland. To behold the other towers along the precipice fulfills all the romantic notions one might have of such things.  A shop selling the swords of Robin Hood and Merlin (spada di merlino) along the forested path between the two castles was clearly tuned to that esthetic.  (He also had complete sets of elfi del bosco, forest elves.) 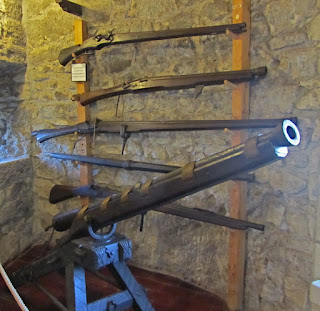 We had timed our visit to coincide with special summer Tuesday evening programs which included free nighttime admission to one of the castles, where medieval-period re-enactments were set up.  The lighting was dramatic—if rather more than anything the 13th century ever dreamed of—and the costumed performers were simpatico.  The 21st c. panorama of lights far below was dazzling.  This was all very fine, especially since it happened to be our 25th anniversary as well.
One advantage of spending the night in a place that attracts mostly day-trip visitors is that as evening draws near, the tourist population dwindles.  So we had no problem getting a table for dinner with a dramatic sunset view.  And in the morning, with the town nearly deserted, we had the trail to ourselves for an hour or so before breakfast when we followed the stone-paved path through woods to the third torre, this one privately owned.  The only entrance is a door about thirty feet up one side.
We didn’t buy a replica AK-47 or even La Spada di Robin Hood or elfi del bosco.  But since we generally do tourism by food, we had to try dolci tipici della repubblica di San Marino (desserts typical of RSM).  So we bought these two hand-made little cakes.  The Torta Titano has a layer of chocolate infused with almond-flavored alcohol sandwiched between two layers of cakey meringue.  Long gone and buonissimo.  Soon to be on the menu is the Torta Tre Monti, described as “five fragrant wafer layers filled with chocolate and hazelnut cream” sealed with rich dark chocolate.  Can’t be bad.  Read more here if you like. 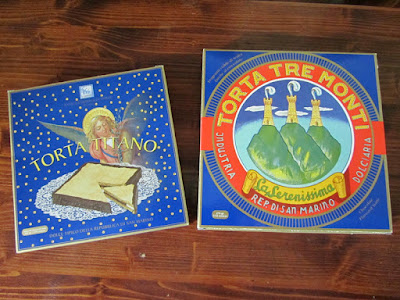 We enjoyed our visit to San Marino.  I doubt that we’d want to live there although there are some definite enticements:  the republic has one of the highest per capita GDPs in Europe, among the lowest unemployment rates in Europe, and a budget surplus with no national debt.  Can’t be bad.
Roberto
Posted by Roberto at 3:23 PM