Laundry, il bucato.  Our appartamento comes with a washing machine, una lavatrice, but doing laundry here requires some different techniques and uses more time than we’ve been accustomed to.  In the first place, ours is the smallest capacity washing machine I’ve ever come across.  It looks okay from the front, but the drum is only about 6 inches deep.  A moderate load of clothing is okay, but one queen-size sheet is really too much for the poor thing.  Furthermore, the shortest effective wash cycle takes about an hour and thirty-five minutes.  So I make a weekly pilgrimage to a commercial self-service laundromat to wash the towels and bed-sheets.  More about that later.
We have la lavatrice, but we don’t have un’asciugatrice, a dryer.  Instead we have this folding rack (uno stendibiancheria), which pretty well blockades the dining room when we use it, and we have a fun set of mechanized rods hanging above the bathtub.
There are six bars on this gadget, each suspended by a cord-and-pulley system.  Hook a ring, lower the rod attached to it, hang wet clothes, pull the rod up to the ceiling and hook the ring on the retainer hook, repeat for other rods, allow laundry to air dry, etc.  I think it’s kinda fun, but then, I’m easily amused.  You do have to plan ahead however, since drying may take all day.
Luckily there is a laundromat (una lavanderia) about eight minutes walk away.  If it weren’t so expensive—anywhere from €5.60 to €8 to wash and dry a load ($8 to $11.50)— I’d consider doing all the laundry there.  But I’m willing to pay the price for fluffy towels and clean sheets done in an hour in one load.  The lavanderia is not without its educational and entertainment values.  Even with multilingual signs, the operations necessary to process your bucato are not immediately clear.  Some washers use €1 coins, but others, and the dryers, use gettoni. These are brass tokens you have to buy from a dispenser on the wall at the rate of €1.30 per gettone.   The exercise of reading all the instructional signs and deducing the required actions can be daunting, even to Italians.  As an old hand now, several times I’ve had to explain how things work—in my halting and semi-grammatical Italian.
As for entertainment, read the English version of this sign. (click on it to enlarge) 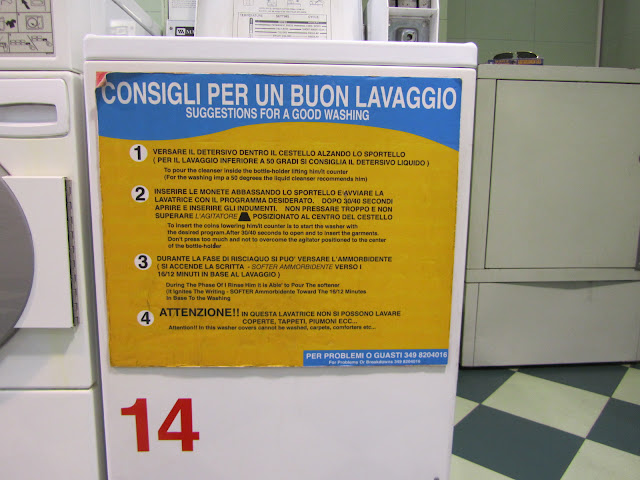 I have to go ignite the writing.
Roberto
Posted by Roberto at 4:12 PM 2 comments: 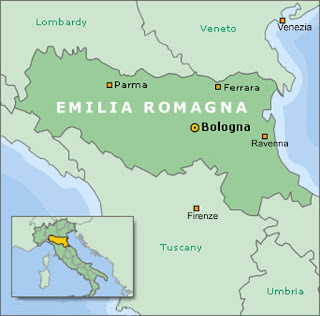 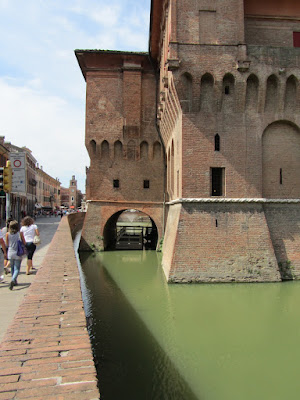 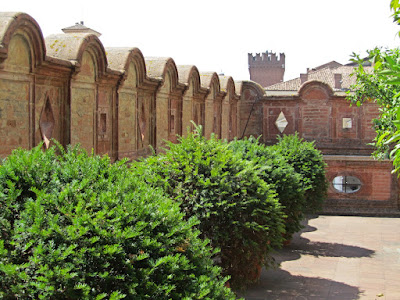 “What do you do for exercise, Roberto, since your Rollerblades are packed away in the States?”
Well, we walk pretty much  everywhere—to the caffè, to school, to the markets, to concerts, to ristoranti, and, um, to get gelato—and in addition, at the end of every excursion there are 27 steps to climb to our appartamento.  For a more directed workout I sometimes walk up to San Luca, or more formally, Il Santuario della Madonna di San Luca.  This church is atop Monte della Guardia, just southwest of the city and about 770 feet above it, and is remarkable for being approached via a continuous arcaded portico that is 3.8 km long (2.35 miles).  There are 666 vaulted arcades in all (depending on who is counting).
The Portico di San Luca starts at the medieval city gate called Porta Saragozza and runs more or less level and mostly straight for about a mile, sheltering shops, small offices and dwelling entrances. 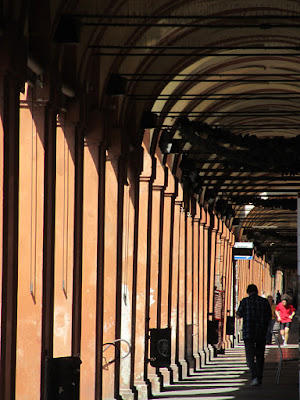 On a Sunday morning most shops are anonymous behind rather unlovely steel barriers, but a few bar-caffès are open, and the occasional well-kept portone looks nice. 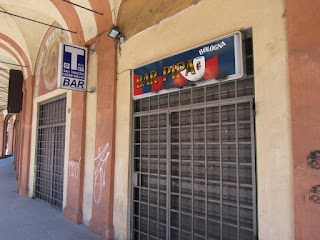 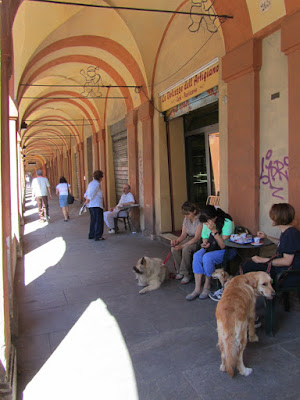 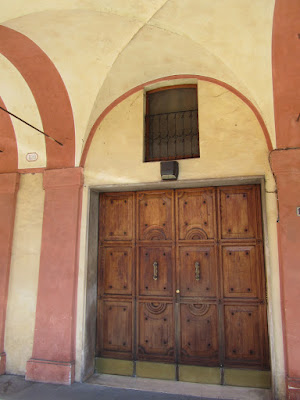 At arcade number 305, the walkway turns left, crossing the road on an elaborate bridge, and starts to climb the hill.  There is an intersecting porticoed walkway at this point, and in the second photo below, taken before 1914 (when Pietro Poppi, the photographer, died), it joins the main path we've been following (not visible) and then arcs up to the santuario in the top right background.
Last Sunday when I went walking, there was a rally for classic motorcycles which used the road that follows the arcades up the hill as a time-trial leg.  There were motorcycles from WWII and maybe earlier, many from the ‘50s and ‘60s and some later.  I saw lots of Moto Guzzi bikes, but also Norton, Triumph, Vespa and others less well-known.  I’m sure there were Ducatis (they’re made in Bologna), but I was too late to see them.  Here’s a shot of the starter at the bottom of the hill with the Baroque footbridge in the background.  The bikes went under the bridge and up the hill to the left, and quite a few spectators used the Portico as a viewing stand.
Once the Portico starts up the hill it turns into a popular venue for runners and walkers, both locals and tourists.  It’s pretty good exercise if you keep up the pace.  The walkway gets noticeably steep in a few parts, even turning into stairs here and there, and the vaulted roof keeps off rain, snow and hot summer sun.  Certainly it’s much more entertaining than a treadmill or Stairmaster considering all the different people you see, the views off over the city, and the variations in decor of the Portico itself.   The covered arcade was built over  a period of about 120 years starting in 1674.  There were originally many shrines built into or painted onto the walls along the ascent, and a few remain, though many give only hints of former glory.  Here and there people live behind the walls, too, some apparently more simply than others. 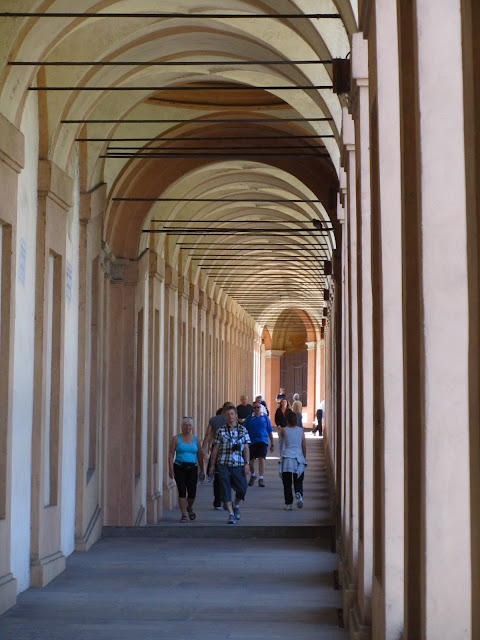 The centuries have also taken their toll on the structure, with water being the eternal enemy of masonry.  Some areas clearly need work.  Others have been restored within the last 50 years and are doing okay.  Nothing seems to be actually falling down at the moment, but I’m glad it’s not my job to keep it that way.
At the top of the hill are wonderful views south toward the Apennines, though most people have as their goal the Baroque church, built in 1723 on a site that is said to have had a Christian church for a thousand years.
The church is truly a sanctuary for one particular icon, a painting of the Madonna and Child attributed to the evangelist Luke, thus San Luca.  Here’s a picture.  I make no judgments on Christian timelines and miracles, but it looks Byzantine to me.
The Portico di San Luca was built to protect the miraculous icon during its yearly processions to and from the cathedral in the center of the city, where it resides during Ascension week and has done since 1433.  The rest of the time it protects a host of religious and otherwise as they make their own little pilgrimages to the top of the hill.
Roberto
Posted by Roberto at 4:55 PM 2 comments: