When we tell people about our plans for our year in Italy, they often ask, "Why Bologna?" It's just not high on the list of places to visit for most Americans. But for those who are interested in architecture, culture, and good food, Bologna offers an abundance of  pleasures.
In 2000, after taking a few Italian classes in California, I decided that it would be helpful to take some language lessons in Italy, and for reasons that neither one of us can quite remember, we chose a school in Bologna. It turned out to be a great choice, and we're looking forward to returning.
Bologna has three nicknames - La Dotta,  La Grassa, and La Rossa: la Dotta (the learned)  because the University of Bologna, founded in 1088, is the oldest university in Europe; la Grassa (the fat) because Bologna is known for the quality and richness of its cuisine; and  la Rossa (the red) because of its red tile roofs and also because Bologna has traditionally been on the left /Communist side of the political spectrum.  It's big enough to have lots to do but small enough to feel manageable.  When we're looking for activities, we can visit an array of museums, historic churches, parks and gardens.  When we're hungry, there are wonderful food markets and restaurants. When we need a bit of culture, there's  music and opera at the Teatro Comunale. If we want to go farther afield, Bologna is on a main railroad line, so it's a good home base for visiting other places in northern Italy.
One of our favorite activities in Bologna is walking the porticoed streets.  These porticoes first came into use in the Middle Ages as a way to provide housing for students at the University by building out over the sidewalks, and today they are found throughout the historic center and beyond. They have the very practical advantage of providing shelter in bad weather, but they also create an air of refinement and a pleasant orderliness and continuity.
Once we arrive, we hope to document some of the things that make the city so appealing, and if you follow our blog maybe you'll find out "why Bologna."
Cinzia
Posted by Roberto at 11:23 PM No comments:


The Web address for our blog stems from a trip to Italy molti anni fa —many years ago—and the slightly cryptic journal notation I made for 31 May 1998:  “Metro and bus to Via Appia Antica.  Walk up and down.  Gelato + peach (fish).”
It was a lovely, warm Sunday afternoon.  We had worked up a gelato craving as we poked along the ancient Roman road, marveling at sections of paving stones still in use after 2000 years and pondering the Imperial-era stone tombs, when per fortuna, we came to a small shop offering not only gelato and cool drinks but also luscious fresh peaches.  I got gelato, but when Cinzia asked the vendor for a peach she got only a look of mystification and disbelief.  She pointed at the peach, the man paused, gave a little shake of the head and a double eyebrow shrug and sent us on our way with a fat, juicy peach.  As we walked on Cinzia puzzled out the  interaction, finally giving herself a symbolic forehead slap.
“I just asked for a fish, not a peach!” 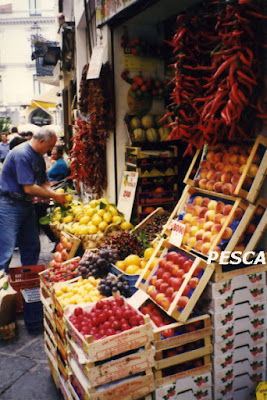 In Italian, a peach is pesca (pays’-ka), while a fish is pesce (pay’-shay).  But a shop that sells fish is a pescharia (pays-ka-ree’-ah).  It seems like a strange quirk of the language, but the memory still makes us laugh. 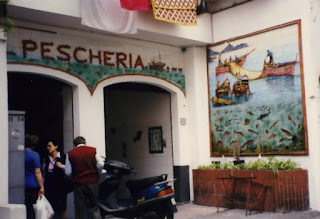