If I had to choose one feature that makes Bologna an attractive and livable city it would be the portico.  (Il portico; plural, i portici)   These colonnaded roofs over walkways are ubiquitous here, sheltering walkers from rain or hot sun, enlivening street scenes with their variety, and not coincidentally supporting lots of valuable real estate above. Many other cities, especially those arising in medieval Europe, have porticoed streets.  But Bologna has the most and is unique in having legislated their building and maintenance—in 1288 AD.   The University of Bologna was founded in 1088, and between that and increasing industry, a housing shortage developed within the city walls.  Creative property owners extended the upper stories of their buildings out over the public roads to make student housing without having to pay for the land.  The government liked the added living space but not the tax-free encroachment, so they started requiring licenses for porticoes but went further, legislating that porticoes were compulsory for all the streets where they were considered useful on private soil, while making the landlords responsible for maintaining the public space as well; this law is still in force.
The original protrusions didn’t actually have supports on the walkways below.  They had angled brick or wooden structures that might be called corbels or brackets.  The Italian term is sporto, from the verb sporgere meaning jut out.
Before long, heavy timber posts were holding up large extensions to the fronts of buildings.  The earliest documented one I’ve come across is from the early 1200s.  A few of these remain around the city and are protected by law.  If the wood deteriorates too much, it may be augmented by steel or other materials, as in one of the examples below.  After some fires, wood was prohibited and ever since brick, stone and concrete have been used to create columned arcades. 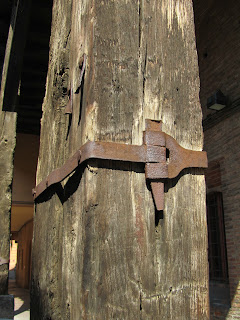 Much of the charm I find in the porticoes stems from the amazing variety of styles and degree of decoration.  Columns may be square, round or octagonal and they may be plastered, painted, embellished with applied stone or terra-cotta, or left natural.  They may be utilitarian without bases or capitals or they may have effusive curlicues from some Baroque fantasy.  Because Bologna suffered a lot of destruction from Allied bombing during World War II, there are many stretches of plain concrete columns where post-war rebuilding was tuned to a different esthetic view and money was scarce.

I suppose because the landlords wanted to maximize floorspace in their expanded buildings, many of the walkways below are luxuriously wide, offering inviting views of shop windows and keeping pedestrians out of street traffic.
The ceilings of most porticoes have simple quadripartite vaulting, but some are more decorative.
Especially decorative are the vaults on two sides of the old Banca d’Italia building on Piazza Cavour.  In the 1860s these were painted by an artist named Gaetano Lodi, and they offer an astonishing and in many cases unlikely range of subjects set off by an abundance of exuberant mid-19th century decorative foliage and trim.
You don’t have to crane your neck and look closely to appreciate the colorful effect of these vaults.  But if you do, you’ll discover vignettes of mythological characters like Icarus opposite San Giuseppe (Joseph showing Jesus how to use a bow saw).  Or how about this one:  God in the center of a vault looking down on Adam and Eve, the wilderness outside Eden, the skeleton of a mastodon, and the representation of a megatherium.  In the open spaces between are little bundles of building materials and stone, perhaps representing the stuff from which the world was formed, floating on bits of rope from above like Deus ex macchine.
Would the world go on without little jewels like this?  Sure, but it’s finding the unexpected bits that makes travel fun for me, and when it comes to i portici di Bologna, you never know what you’ll find around the corner.
Roberto
Posted by Roberto at 7:23 PM