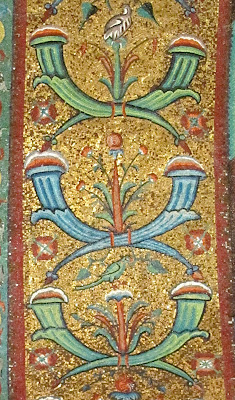 Mosaics.  That’s the big draw in Ravenna.  And not just any mosaics, but some of the oldest, best preserved and most beautifully created of the Christian era to be found in Italy.  We’ve seen gorgeous church mosaics from Palermo and Monreale in Sicily to Basilica di San Marco and Torcello in Venice, but they are from only the 11th or 12th century AD.  Ravenna’s famous mosaics date from about 430 to 550 AD.  The style of these art works is called Byzantine, designs and artists both having come from the Eastern Roman Empire.  The figures look a little flatter, taller and more abstract than those from classical Rome.
One surprise is that the mosaics exist at all.  There were more of them centuries ago, but warfare ancient and recent, vicious doctrinal battles within the Christian church, and the inexorable subsidence of the buildings into marshy ground have destroyed or altered many.  I suffered a deep pang of regret when I read that archeologists found 170 kg (374 lb) of tesserae in the mud at the base of the now-bare walls of Ravenna’s Arian Baptistry,  a tessera being one of the little pieces of colored stone or glass that form a mosaic pattern or picture.   As always, you can click on the pictures to enlarge them.  Click this link for more details about Ravenna, and there are links at the bottom of that Wikipedia page for more details on the UNESCO-lauded locations I mention below.
Okay, time for Roberto’s little history lesson.  Why are all these wonderful mosaics in Ravenna?  Today when you walk into town from the train station you find a wealth of charming streets, lots of bicycles, promenades where the vecchi sit and talk and watch the tourists, and a guide map with 56 places you might want to visit.  Not much different from many other cities in Italy.  But 1600 years ago, things were different.  The emperor Honorius moved the capital of the Western Roman Empire to Ravenna in 402 AD, and from that time and for several centuries the city remained either a capital of empire or seat of kingship, and whether due to faith or ego, many religious buildings were created there at royal behest.


One of the early regents was Galla Placidia, a daughter of Roman Emperor Theodosius I and evidently a formidable and well-traveled woman. (This article about her is daunting to say the least.)  She was also a fervent Christian and is credited with building the oldest extant church in Ravenna, San Giovanni Evangelista, in the early 5th century.  Well, it is extant, but not much of the original remains after a Gothic-style rebuild in 1213, stripping of mosaics in the 18th c., disassembly and reconstruction due to sinking 3 or 4 meters, and WW II bombing and rebuilding.  A remnant of the 5th c. floor remains on display along with quite a few samples of the 13th c. floor that came to light after the bomb blasts.


One of the eight UNESCO World Heritage Sites found in Ravenna is the so-called Mausoleum of Galla Placidia.  It’s a small, brick, cross-shaped structure with tiny windows of amber-hued alabaster.  There are three sarcophagi inside, but Galla isn’t in any of them and no one pays them much attention because of the mosaics on the ceiling (completed about 430 AD).  It’s quite dim inside, but today’s electronic cameras pick up an amazing amount of detail.

On the other end of the size scale is the nearby Basilica di San Vitale (though being octagonal, it isn’t basilica shaped), finished in 548.  This may be my favorite set of mosaics in Ravenna.  The edifice is architecturally important because it’s the only major church to survive intact from the reign of Justinian the Great.  He (and the bishop Maximianus, who saw the work completed) are pictured in a courtly mosaic on the upper left side of the presbytery.  The V-formation of the men is implied by the way their feet overlap.  The Empress Theodora—his wife, and one of the most remarkable women in western history—is shown on the opposite wall with attendants.  (She was 20 years younger but fell ill and died 17 years before him, about when this church was finished.)  Some of the jewels she wears in this mosaic are slices of mother-of-pearl.  Personally I favor the second woman to the right of Theodora.

Most of the large San Vitale mosaics are religious, but the abundance of supplementary floral, animal and geometrical designs is wonderful.  It fills all the unused spaces:  soffits, friezes, arches, spandrels, backgrounds.  A simpler style covers the floors, mixed here and there with later marble inlaid patterns and a labyrinth.

Due to some technical restrictions, I've split this topic into two posts.
See Ravenna, part 2 for the continuation.