Saint Francis of Assisi is generally credited with producing the first re-enactment of the nativity of Jesus, using a cast of live animals and people in 1223.  Since then, and especially from the 15th century onwards, churches, communities and individuals in what is now Italy have raised the art of the presepe or presepio (often translated as Christmas crib) to amazing realms of display and creativity.
(You can enlarge a picture by clicking on it.)

Some presepi are still made life-size, like this one in Piazza San Pietro at the Vatican which is kept hidden behind draperies until Christmas Eve.  The figure of the baby Jesus is added at the conclusion of the midnight mass. 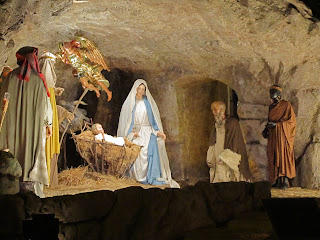 There’s another smaller but in some ways more elaborate presepe inside St. Peters.  With the inclusion of scenes from everyday life there is a hint of the elaboration to the original nativity theme which now characterizes many Italian presepi. 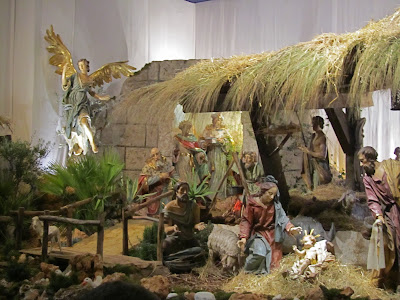 In Napoli the week before Christmas we visited an impressive assembly of presepi in the old style displayed in the church of Santa Maria Maggiore, as well as the museum of presepi in the enormous Certosa di San Martino.  And every major church and even the Bank of Naples had fascinating presepi of their own. 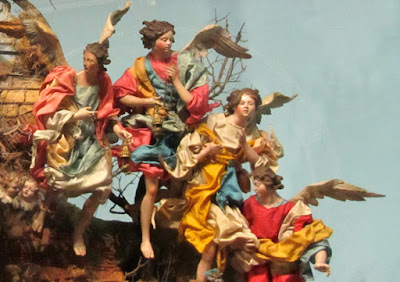 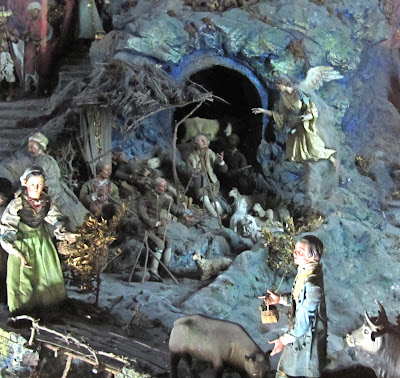 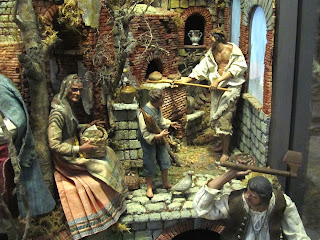 In Naples beginning in the 15th century the typical presepio included 1) the Nativity, 2) the Announcement by angels to the stunned peasantry, 3) the Inn or Tavern.  The Magi were usually included in the Nativity section but also became a big feature with a cavalcade of oriental figures and animals.  Over time the Tavern section grew larger and eventually expanded to include characters, animals and objects from every walk of life.  The holy family sometimes was nearly lost in the crowds. Originally made of wood or a wire frame dressed in cloth, the standard material is now painted and clothed terracotta, with colored wax often used for fruits and veg. 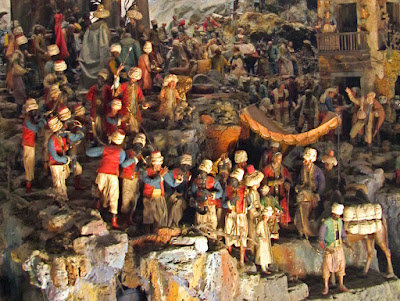 The 18th century style of presepio building is enjoying great popularity, rendering entrancing views of a pre-industrial world.  It appeals to craftsmen who strive to produce beautifully accurate figures and scenes and to viewers who are rightly awed by the detailed work and amused by snippets of life.  Often classical ruins are included, spurred by the discovery of the buried ruins of Pompeii in 1749, as a symbolic move from paganism to Christianity.  Fountains, springs, and rivers are included as signs of life.  Musical instruments are always included, often the zampogna, which is a form of bagpipe.


Not everyone confines their modeling to rustic old times.  These days if you visit Via San Gregorio Armeno in Naples, the street where everything relating to presepi can be bought, you will see figures from government, entertainment, and sports alongside tiny automobile models, TVs and even Steve Jobs holding a Mac.  I have to ask myself how many people set up a home nativity scene populated by star soccer players, Marcello Mastroianni or Barack Obama, but it’s fun to see the imaginative representations of them in the shops. 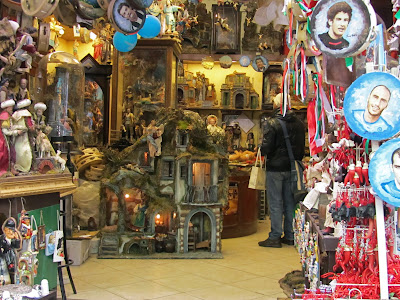 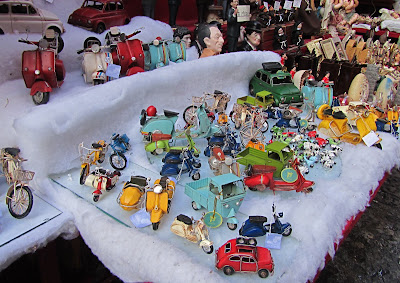 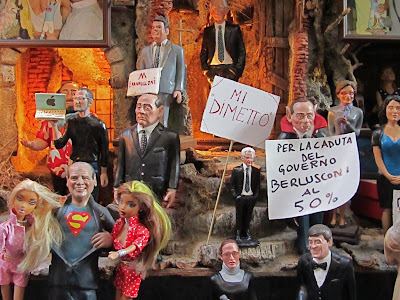 Above are figures from the news.  You can pick out Steve Jobs at the left, but you might not recognize the new Italian prime minister, Mario Monti (available in two sizes, with his hands in his pockets).  The ex-prime minister, Silvio Berlusconi, is at front left with two of his playmates, or in the stiff and formal style behind the blonde in red, and at right with vampire teeth and cape.  "Mi dimetto" means "I quit."  The other big notice says that due to the fall of the government, Berlusconi is offered at 50%.

Below are Italian sports heros and heroines for your home nativity scene. (Well, yes, also Monti again and the pope.)  The realism is impressive, right down to the tattoos and sponsor logos. 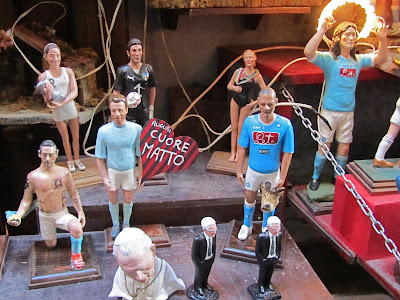 Not everyone goes in for realism.  To close out, here’s a presepio made by school kids in Rome using only commercial dried pasta shapes sprayed gold.  The ground is covered by tiny stars called stelline, the wooly sheep are made from a shape called radiatore (they look like the corrugated cooling fins in a radiator core), the shepherds’ hats from orecchiette (little ears), and one shepherd is sitting on a piece of rigatone.  I counted over 20 different shapes. 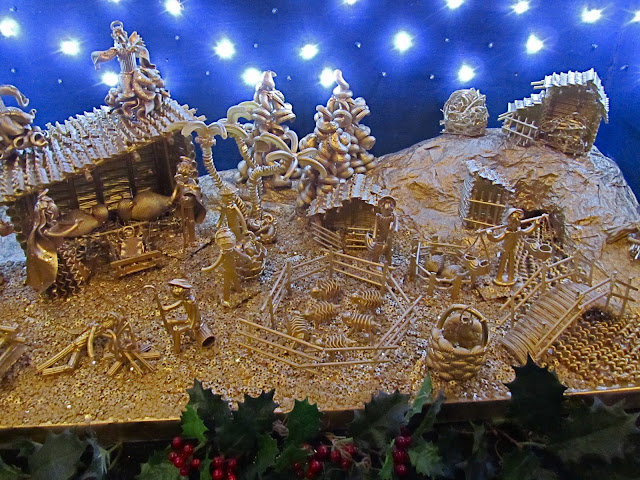 I should add that the presepi stay on display at least until January 6th, which is L'epifania, or Epiphany.  That of course is when the three kings traditionally find the baby Jesus and give him gifts.  In Italy it also marks the arrival of La Befana, an old woman who flies around the country on a broom dropping presents down chimneys to good children and carbone—coal—to misbehavers.  These are in addition to what Babbo Natale—father Christmas—has already delivered on Christmas Eve.  Not a bad deal, if you’ve been good. 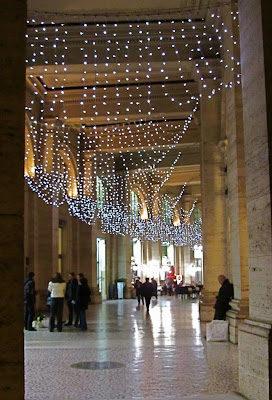 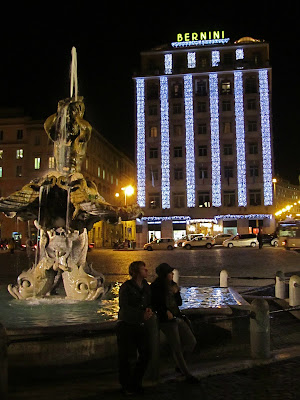 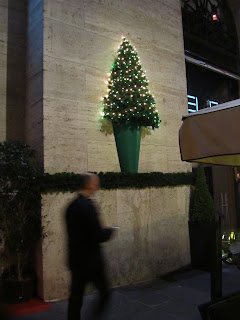 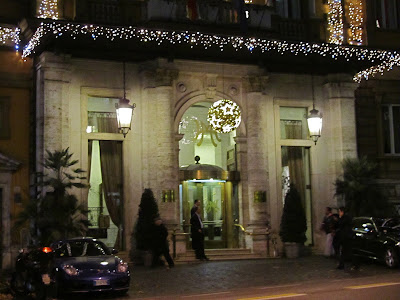 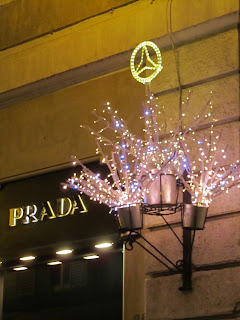 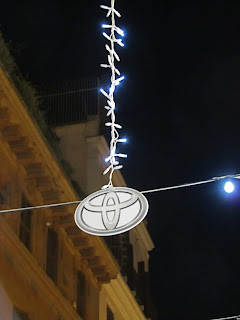 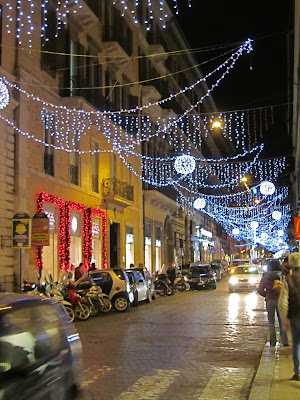 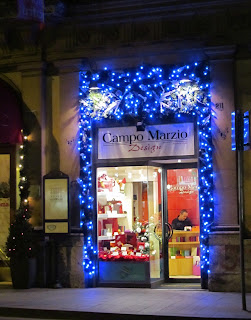 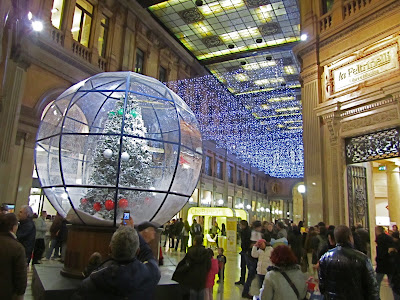 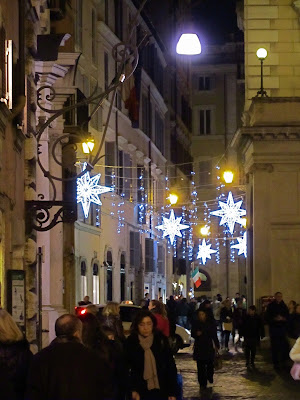 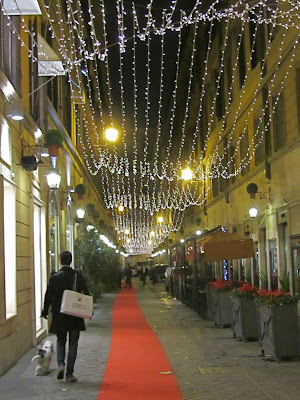 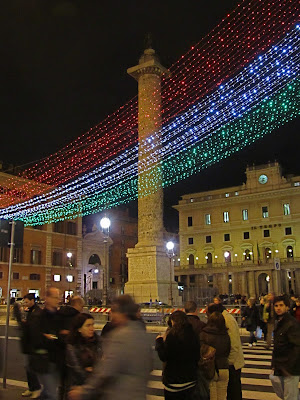 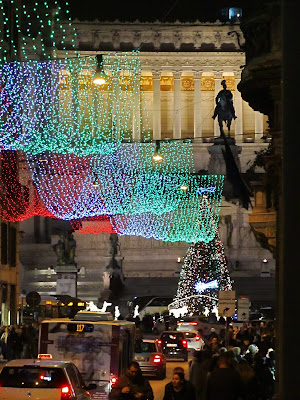 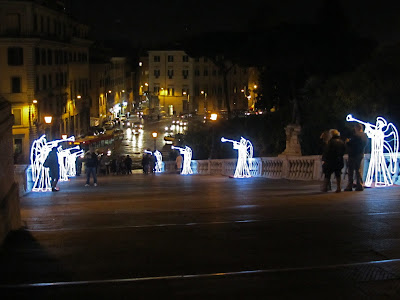 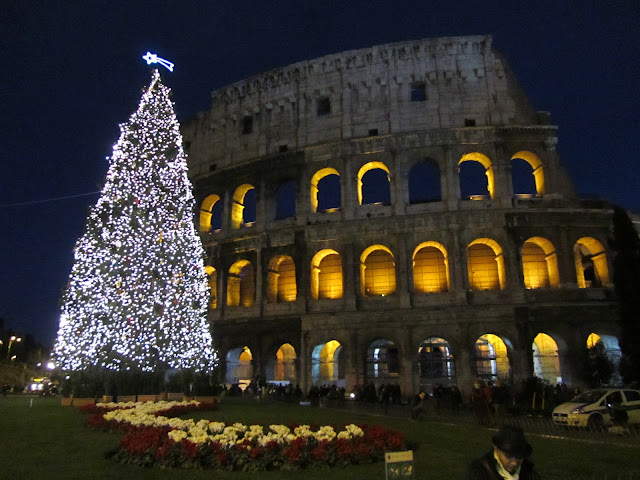