Going to the Library

Roberto and I are both big readers so we were pleased that we could make use of the Bologna city library, Biblioteca Sala Borsa, during our stay. It’s housed in a portion of the Palazzo d’Accursio, a huge building that takes up the entire west side of Piazza Maggiore.  The oldest part of the Palazzo  dates from 1287, though archeological excavations under the building show various civic and religious uses that date as far back as 700 BC.  The portion of the building that today houses the library was originally a covered courtyard with a garden used by the residents of the Palazzo, but in the tradition of creative re-use, at various points in time it has also been a stable, the post office, a sports arena, and the city Stock Exchange, or Sala Borsa. The library moved into the building in 2001.
The entrance to the library is right near the Fontana di Nettuno, and the steps leading into the building are often filled with people who are waiting to meet friends or just hanging out.
As you walk into the library proper you enter the Piazza Coperta, a grand atrium surrounded on all sides by two levels of galleries.  It’s a light-filled space that manages to be impressive but not overwhelming, and the galleries around the perimeter evoke the feeling of the porticos that are so typically Bolognese.  This is where you check out and return books, plus this being Italy, there’s an adjacent caffè where you can get coffee, sandwiches and pastry. Transparent panels in the floor let you look down into the ancient ruins under the building.

The breadth of the collections is pretty remarkable. There are 250,000 print volumes (50,000 of them for children and teens); over 12,000 DVDs, including films, television shows and documentaries; dozens of newspapers and hundreds of magazines in a wide array of languages; and 22,000 music CDs, from Italian pop to jazz to American folk to what seems like every piece of classical music ever recorded. Books are available in English, French, Spanish, German and Hebrew with special sections in Arabic, Chinese, Russian, Polish and Albanian. 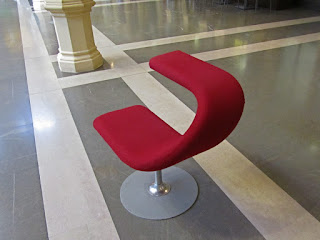 And if that’s not enough to choose from, the online catalog includes not just the Sala Borsa library but all the University of Bologna libraries (many of which are open to the public) and all the other public libraries in the region of Emilia-Romagna.  Roberto has been doing some research and work for a friend who is giving a presentation at Humanities West this fall, and he wanted to include a map from an atlas published in Germany 40 years ago. We checked the catalog here not really expecting to find it, but it turned out to be available in not just one but three of the university libraries. So one morning Roberto took a walk to the biblioteca for the Dipartimento di Storia Antica (Department of Ancient History) where the accommodating staff helped him locate the book.
I tend to panic when I don’t have something to read, and that generally means a novel or a good mystery. At Sala Borsa they divide novels into Letteratura (published before 1945) and Narrativa contemporanea (more recent works) and they’re filed separately. In the Narrativa contemporanea section the books are filed by author, as you would expect, but they’re also filed with the books in Italian and English all together. That’s fine if I’m looking for a specific book, but it makes browsing a bit of a challenge. I have found a couple of Italian authors that I like, and reading their books helps me expand my language skills, especially my vocabulary.
We’ve had good luck finding books in the Letteratura section, which is divided by language, so there are sections for Italian, German, French, English and American authors, and then within each section you’ll find both the original works and translations into Italian. If you want any classic from English or American literature, it’s probably on the shelves. I’m thinking of this as an opportunity to catch up on classics that I never read, like Brideshead Revisited, which I really enjoyed and which of course brought back fond memories of the old Masterpiece Theatre production. We’ve also been working our way through Agatha Christie, who is well represented in both English and Italian. In Italy mysteries are called gialli, which means yellow, because the first mysteries printed here had yellow covers. The covers for modern mysteries are no longer always yellow but you can see the traditional giallo covers in the photo of the Agatha Christie books.


The DVD selection seems to include every mainstream Italian film ever made, a broad selection of new and classic movies from the US and other countries, and television shows from both Italy and the US. It’s hard to imagine what an Italian would make of something like the Marx brothers or Borat or Six Feet Under, but they’re available. They are of course all dubbed into Italian, as Italians hate subtitles. Most Italian movies have subtitles in Italian for the hearing-impaired which we generally turn on and find very helpful, as the dialog goes by very quickly. We have noticed that the DVDs for American movies often offer multiple language options. For example, after watching several Italian movies that were somewhat bleak and depressing, we decided to watch The Italian Job just for fun. It was the remake with Mark Wahlberg,  Charlize Theron and the BMW minis, not the original with Michael Caine and the old Mini Coopers. It had audio in Italian, English and Spanish and subtitles in English, Italian, Spanish, Greek, Hebrew, Croatian, and Slovenian.
The movies are filed by director rather than by title, which surprised us at first, but it makes sense if you think about the challenge of titles in different languages. Sometimes a movie keeps its original title—The Italian Job stayed The Italian Job— and sometimes the title is translated into Italian—The King’s Speech became Il discorso del re —which would make finding a movie by title difficult. It also seems like people here pay more attention to who the director of a film is, and not just for big name directors.  And at least in theory you can look in the library catalog to find out the name of the director for any specific film.  Of course, for a good part of August you couldn’t access the library catalog from the computers in the library. The catalog was fine, and we could get to it from home computers, just not from the library itself. There were hand-written signs on all the terminals that said there was a problem with the network. Then last week, access was restored. We suspect that the one person who had the password that they needed to fix the problem was on vacation for Ferragosto.


One other thing that we have noticed is that the library is very serious about returns.  Items have to be handed to a library staffer who leafs though every book to be sure it hasn’t been damaged—none of this off-hours book drop nonsense.  The rules also state that if you return an item late, you lose your library privileges for a month!  I don’t know whether they really enforce that rule but it certainly got our attention.
Cinzia
Posted by Roberto at 12:52 PM