About 100 meters from our apartment building a canal intersects with our street and disappears under it.  The canal is a remnant of the water-power and transport system used in Bologna during medieval and Renaissance eras for grinding grain and spinning silk.  Beyond the mills, channelized rivers delivered goods to the river Po and thence to the Adriatic and Venice, one of the world centers of commerce at the time.
The mills are all gone, as far as I know, though many of the buildings remain and there are bits of ironwork and machinery left here and there.  After World War II most of the open canals were roofed over to provide parking and building space.  (There’s a project in planning to open some of them back up.)  But the canals continue to carry the natural flow from the rivers they divert from (and the storm-water runoff from the city), and it turns out that it’s possible to visit them sotto le strade (under the streets).
First a bit of geography and history.  Bologna sits up against the Apennines—Italy’s backbone of mountains—and thus profits from the natural flow of year-round rivers (fiume Reno to the west and  fiume Savena to the east) and seasonal streams (torrente Aposa and others).   (In the time of Augustus, the Romans built an aqueduct 18 km long that draws from another stream in the hills.  It runs completely underground, was able to serve a city of over 25,000 people, and is in use today.)  The industrial canals within the city walls of Bologna date from the 12th century.  The number of mills increased rapidly after the introduction of silk-making in 1272 and especially the invention of a rather amazing water-mill-driven machine for spinning the silk filaments into strong threads of consistent size and strength.  It was a Bolognese secret, so the mill buildings had no windows through which spies might figure out the method.  In the 16th c., 40% of the population depended on the silk industry for a living.  By the 17th c. there were 119 mills inside the walls, driven by 353 water wheels.
Our visit to the watery remains of this by-gone era started by e-mailing a reservation request to a Web site.   We were instructed to meet at a street corner of via Riva di Reno, where we found a disparate group crowded around a nondescript manhole. [#1 on the map]  Looking down I could see a big rubber raft (gommone) floating on the canale di Reno, flowing by about 3 meters below.  We were issued helmets before clambering down into the darkness. 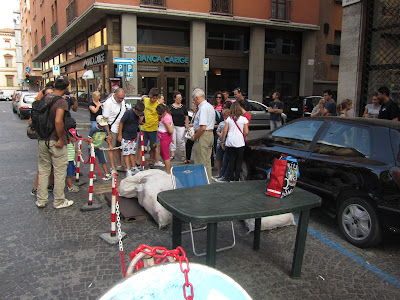 When our raft was full, a guide standing in the canal, wearing chest-high waders, spun us around, hopped aboard and started us on our way.  The current was probably running at 4 or 5 knots, so we moved right along, dodging low-hanging masonry and shadowy protrusions.  One passenger had a flashlight and there were a few big candles set on ledges now and again for atmosphere, but it was pretty dim. 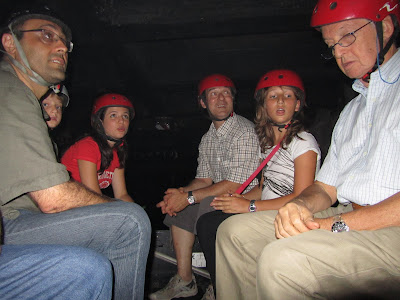 At one point we came to a small dam and cataract where we had to crawl out of one boat, across a makeshift bridge two planks wide over the rushing water and into another raft on the downstream side—all in the chiaroscuro of flickering candles, erratic flashlight beams and twilight shafts of light filtering down from access plates in the street a few feet above.
Before long we drifted into the open, having floated almost under Bar Impero, behind gelateria Peccati di Gola, and into the section of canal near our apartment.  From water level it was fun to look for signs of ancient mill works, but soon we drifted underground again where the stream made a sharp left turn, passed under another road and the raft came up against sluice gates, though the water continued on, falling noisily.  We, however, scrambled out of the boat, dodged rusted machinery and mysterious constructions from the past, and were sent up a narrow stone stairway to the street above—which turned out to be via delle Moline (Street of the Mills). [#2]


That marked the end of  our boat ride, but not the adventure.  Our group (several boatloads) walked past our house [X marks the spot], past Basilica di San Martino, and into a small parking lot where hydraulic jacks raised an otherwise nondescript steel plate to reveal stairs leading down and down. [#3]   We arrived in a brick-vaulted tunnel about 4 meters high with some water flowing in a channel along one wall.  This turned out to be the course of the torrente Aposa under Bologna, along with storm drains and a few other underground streams.  It also makes a handy route for other drain line piping that runs near the bases of the walls, partly encased in concrete.
We walked through this great man-made cavern for about 800 m. (half a mile), under busy streets, medieval buildings, churches and shops.  Our guide stopped often to explain features and history.  There are parts of a Roman bridge foundation along one section, small tunnels feeding from distant street drains, outlets from building gutters, and a few places where someone in a past age extended his basement or cantina right through the tunnel wall. 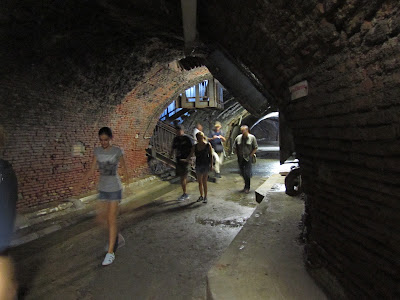 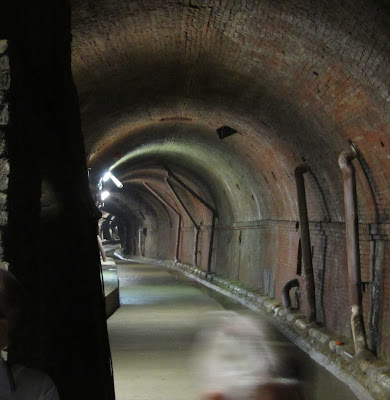 We came up from the nether reaches much as we’d gone down, but in Piazza Mingetti near the main post office [#4], and not far from Piazza Maggiore [#5] where a few weeks before we’d watched The Phantom of the Opera.  Our expedition made me think of the Phantom’s settings below Paris.  But try as I might I didn’t hear any eerie organ music sotto le strade of Bologna.
Roberto
Posted by Roberto at 12:10 AM