On June 2 Italians celebrate  Il Giorno della Repubblica (the Day of the Republic), which is  something like 4th of July in the United States.  Following the fall of fascism at the end of WWII, Italians voted on whether the new government should be a reinstatement of the monarchy or a constitutional republic, with “republic” winning.  This year Italy is also celebrating the 150th anniversary of the unification of Italy in 1861, so the celebrations are doubly meaningful.
In Bologna the event was celebrated in Piazza Maggiore, the big square in the center of the city right in front of the Basilica of San Petronio.  First there was a ceremony at the wall of the caduti (fallen) from WWII, near the Neptune Fountain, with local survivors carrying their military unit banners in a short procession.
Here is one of the vecchi (old ones), a veteran of the Bersaglieri (sharpshooters), the Italian Army’s high mobility infantry corps, distinguished by flowing black feathers on their combat dress helmets.  This fellow was riding the bicycle he used during the war and had a recording of Verdi’s Và pensiero playing.  It was the unofficial anthem of the Italian unification in the 1860s. 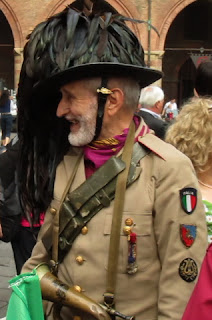 Then, at exactly 11 o’clock a fine army band began the parade of military squads and civil authorities into the piazza.  Italy has a few more of these than the US does, including the Carabinieri, which is a national police force but part of the military, and the Guardia di Finanza, which is the taxing authority, but which also has military strike forces for action against organized crime, drugs and smuggling.
We had a great view as they all marched past us. 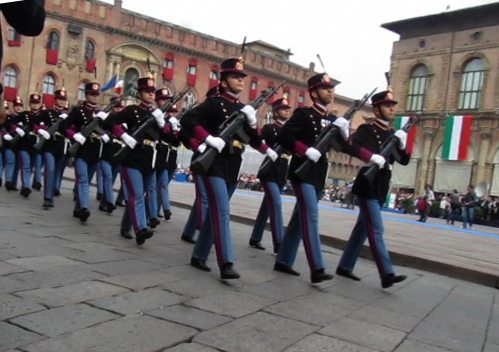 When all the military units had assembled, the veterans marched in again bearing their banners, and then came banners of all the communities in the local region, headed by Bologna.  All this was accompanied by a fine series of “Attention” and “Present Arms” by the military squads and an urgent cadence from the band that was impossible to ignore. 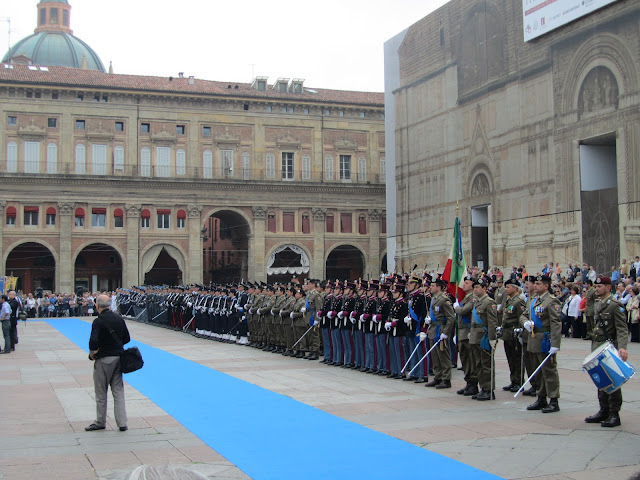 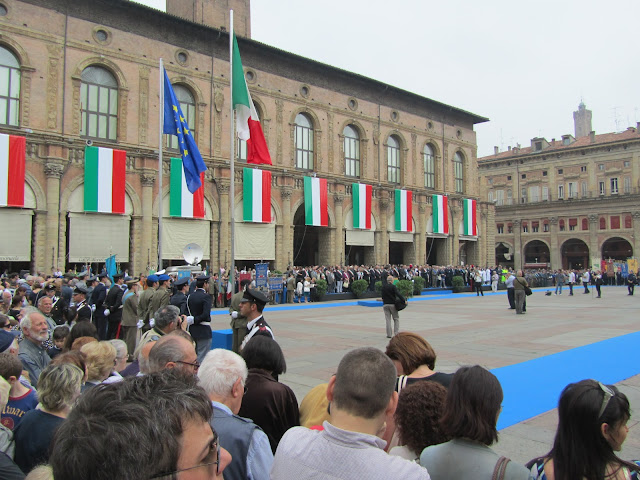 When everyone was present and official speeches had been made,  the Italian national anthem was played and sung, ending with a rousing Si!
During all of this a curious, and I would say typically Italian, atmosphere pervaded.  There were lots of kids there, and everyone made special efforts to let them see, and no one paid much attention to children not quite under control.  The crowd, which had edged right up to the honorary blue carpets was easily persuaded to move back by gentle urging from a single army captain walking up and down, but it would edge forward again if he didn’t pay attention.  But he was the most temperate man you could imagine, pausing to talk to many and to give affectionate pats to each child he came to. You might say there was an abundance of authority present but sensible enforcement. 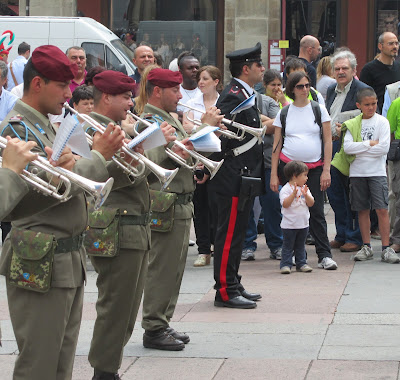 Finally all the troops and dignitaries withdrew leaving only the band, which, much to our delight started playing a Sousa march and followed that with several more crowd-pleasers, including a great WWII-era swing number.  Here are a couple of pictures of the band.  The leader would start each piece by raising his hand and snapping his fingers only two or three times to set both the tempo and rhythm.  In the end they too marched off, to great applause. 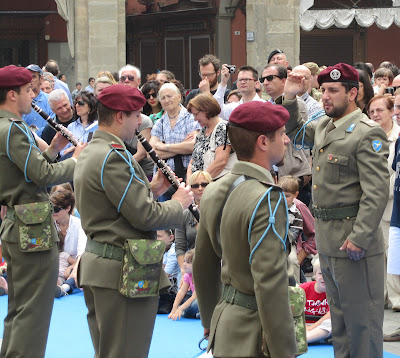 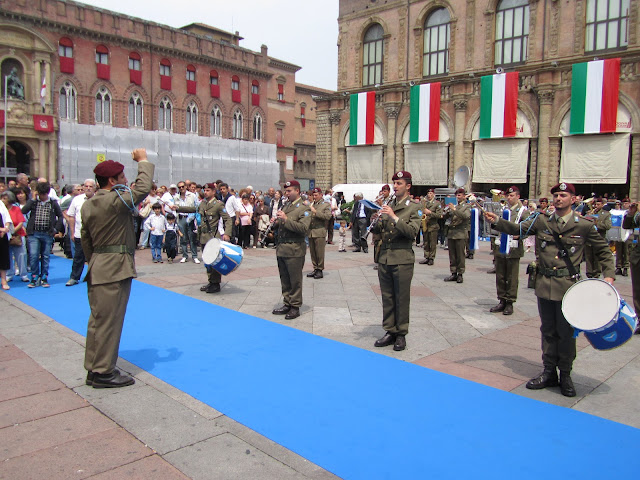 Later we saw on TV that there was a much bigger parade with more ceremony in Rome, but we went away happy to have participated here in Bologna.
Roberto
Posted by Roberto at 12:06 AM