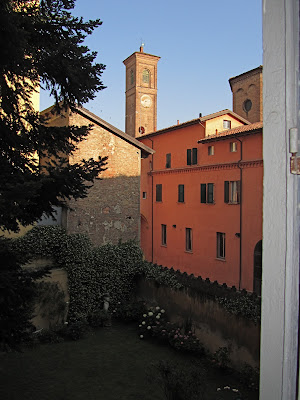 There are a lot of good things to hear in Bologna.  One sound we enjoy every day is the clangorous pealing of bells from the Basilica di San Martino Maggiore, which is just over the garden wall behind our apartment.  Depending on the day of the week, the festival being celebrated or perhaps only at the whim of the bell ringer, the four big campane send their message out over the city.  Sometimes they ring in order from high to low, sometimes in changes and often in apparently random patterns.  One thing is certain: we don’t sleep through the ringing.  There are other churches within easy hearing as well, and sometimes I think the ringers call out or challenge each other.  And it turns out there’s a Bolognese system of bell ringing.  You can read more here, including further links to videos. 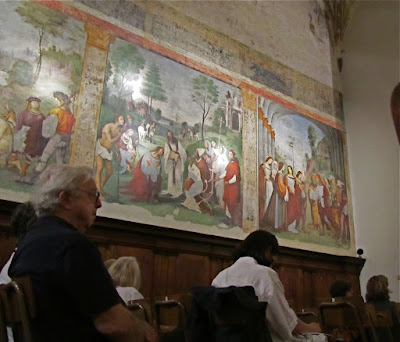 We also benefit from the schools of music in Bologna.  Last Sunday we happened to see a notice for an early evening concert in the oratorio of St. Cecilia, with its 16th century frescos.   The price was right—an offering of your choice.  The presentation was by four music students, a young woman pianist and three cellists, part of the Festival of San Giacomo that runs into October.  I can’t praise the young woman pianist enough.  She began with two challenging pieces by Bach and finished the evening with a beautifully lyrical, wonderfully executed Chopin ballade.
Many notes.  {:-O)
In between, she accompanied each cellist in turn in works by Dvorak, Tchaikovsky and others.  The deeper sonorities of the celli sounded great in the acoustically live stone oratorio.  So sorry I wasn't able to photograph the artists. 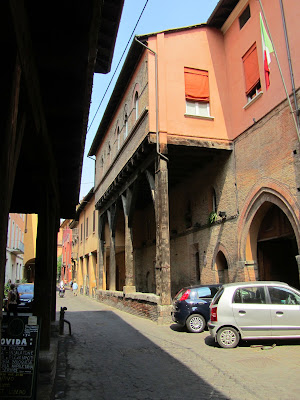 This past martedì (Tuesday) we came across a flyer for a concert given by five young artists at the School of Italian Opera, associated with the opera house here.  The presentation was right around the corner from our apartment in a building fronted by one of the oldest porticos in Bologna, dating from the 12th or 13th century.  You would never know that a room like this lay behind that façade.  The singers all had powerful voices, well suited to an opera house, and elicited bravos from the audience.  I actually got chills at the end of "Recondita armonia" from Tosca, and the duet from La Boheme "Oh soave fanciulla" brought tears to many eyes.  All together twelve operas were represented, and we went home well pleased.  And the concert was free. 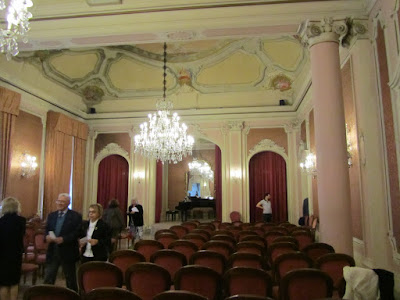 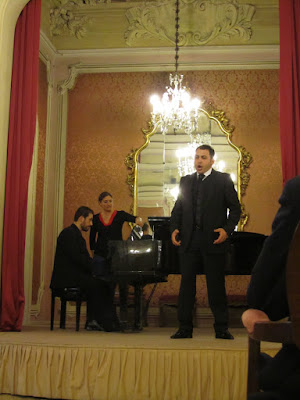 Last night as we were washing up after dinner, we heard a choir singing.  As with the bells, San Martino next door was the source.  Apparently the hall where the choir practices opens toward our garden, and for over two hours (until nearly 11 p.m.) we were  serenaded with music by (I’m guessing) Monteverdi or another late Renaissance/early Baroque composer.  It was wonderful to throw open the windows and let the multi-part harmonies flow in.  It was a really good choir, singing a capella, and a fine way to end the day.    The next sounds we heard were the birds calling out the dawn.
Roberto e Cinzia