The end of our year in Italy is in sight, sad to say (siamo molto tristi), and for the final two months we have moved to Firenze, that is, Florence.  Our apartment here is in the Oltrarno—across the River Arno—not far from the Pitti Palace and the Boboli Gardens.  This puts us out of the major press of tourist crowds and into a neighborhood still largely populated by “real” Italians and home to shops of traditional artigiani, antique dealers and negozi praticali (stores for necessities like food and hardware).  Just around the corner (a due passi, two steps away) is the charming, leafy piazza fronting the church of Santo Spirito.  Most mornings after cappuccino at Caffè Ricchi we buy garden-fresh vegetables and fruit from one of the small vendors in the piazza. 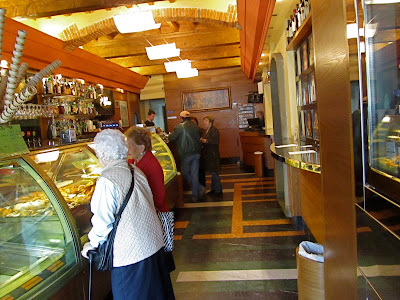 Florence is different from Rome in several ways.  Rome is vibrant, almost frantic with activity, traffic, tourists, and buses.  There's so much to do and see that you could spend years and years.  The streets are lined with structures that range in age over thousands of years.  Next to an apartment building dating from the 1920s there might be a 5th-century church sporting renovations from the 9th, 13th, 16th and 17th centuries.  And just down the way there could be an ancient Roman wall from 150 BC or Roman columns built into the outside of a medieval house.  There is also a Roman attitude that's not easy to put into a few words but can sometimes be seen in a tendency toward intense discussions and a certain attitude of entitlement—though every individual Roman we dealt with was wonderfully friendly, helpful and had a good sense of humor.

Unlike Rome, Florence doesn't have much truly ancient architecture, so it looks a bit more homogenous, though still charmingly old to American eyes.  There are lots of buildings from the 15th century and later, but few older than 11th c.  There was a Roman community here, Florentia, but it was small and most architectural remains are buried, though the forum expanse and primary crossroads persist at the Piazza della Repubblica. 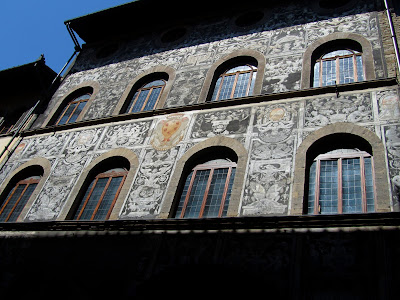 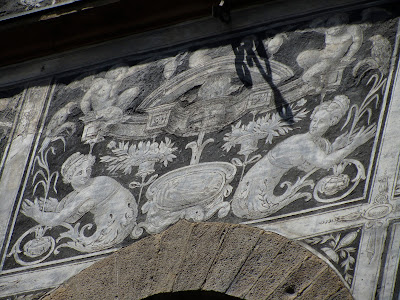 The majority of the city center is off-limits to most cars, so even though there are a zillion tourists, they can often use the whole street for a walkway—but watch out for bicycles.  The north of Italy is also better off economically, and law-enforcement seems more assiduous here, so there are fewer beggars and homeless to be seen.  The historic center is also much smaller than Rome's and seems to have a somewhat lower percentage of tourist souvenir shops, though if you are after anything made of leather there are hundreds of shops and market stalls to choose among, and every high-end international apparel company in the world appears to be represented within a few blocks of the Piazza della Repubblica.  In the area around our apartment are lots of antique shops but also quite a few small workshops (laboratori) where old men (mostly) are repairing furniture or creating elaborate carved picture frames.  There's a 16th-century ex-palazzo across the street used as a storehouse for one of the dealers, and through the ancient window bars can be seen hundreds of elaborate crystal chandeliers hung from the beams.

Moving to Florence means a shift in historical emphasis for me. Re-focusing from ancient Rome to the Renaissance means learning or re-learning a lot of art history and politics, but I’m getting there, replacing my lists of emperors and popes with the Medici family tree.  On the other hand, the food transition has been easy.  The pastries are different but excellent.  We haven’t seen Roman-style artichokes (carciofi alla romana) in the markets or ristoranti, but Tuscan specialties are plentiful, so I see a bistecca fiorentina in our near future.  And there’s a gelateria on almost every corner, so life is good. 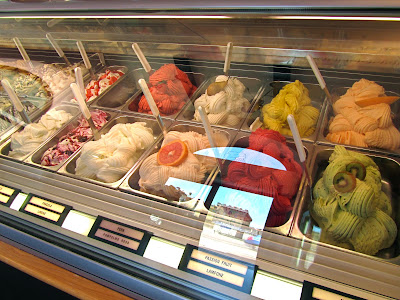