Aqueducts are among ancient Rome’s best-known engineering successes due largely to the beautifully rhythmic arcades and bridges that still stand in France, Spain, Italy and elsewhere.  Symmetry, scale and pleasing geometry make them eye-catching and memorable, and the ruinous sections can be romantic and historically evocative.  But there is much more to aqueducts than you might think.  For one thing, without the abundant water supplied by them, Rome itself would not have been able to support its million-plus population.  The legacy of that abundant water remains today in the form of both decorative and utilitarian fountains everywhere in the city.  The Trevi Fountain is one among many that publicly celebrate the arrival of an aqueduct.

After spending an afternoon in Rome’s Parco degli Acquedotti, the park of the aqueducts, and taking a guided tour of a usually inaccessible section a bit closer to the city, I was motivated to find out more.

Toward the end of the Imperial era, say 300 AD, the city of Rome was served by about a dozen aqueducts (acquedotti), the oldest dating from 312 BC and the last completed in 226 AD.  Until they were cut in 510 AD by besieging barbarians, they supplied more water than the city needed, allowing for abundant public fountains and bath complexes and expansive private gardens.  If you know where to look it is possible to find remaining bits of those ancient constructions throughout the city, a few arches here, some foundations there, or even more recent aqueducts piggy-backed onto ones from the Empire.

Most of Rome’s water came (and still comes) from springs in the hills to the east, also the source of the River Aniene (or Anio in Latin) that joins the Tiber north of the city.  Many of the water conduits followed similar paths and entered from the same southeast corner of town after following circuitous paths of as much as 90 km (54 miles).  Astonishingly, for most of that distance the aqueducts were in underground passages dug by hand and lined with stone and waterproof plaster or concrete.  Only for the final 10 or 15 km (6-10 miles) did the channels emerge from the earth and proceed across the plain on arcades as the ground elevation fell away toward the River Tiber.

The most spectacular aqueduct in the parco is called the Aqua Claudia, begun by Caligula in 38 AD and finished under Claudius in about 52 AD.  Though many of the arches are now broken, there are still long, continuous arcades, and while impressive from a distance (they’re easy to see from the train line toward Naples), their true magnitude only becomes apparent when a person stands right against a pillar.  This was the tallest of the ancient aqueducts and arrived in Rome high enough above the ground to serve all the regions of the city and delivered nearly 50 million gallons of water a day.  But thinking big, a second aqueduct channel was built at about the same time, known as the Anio Novus, with a source even farther up in the hills, giving another 50 million gallons a day of even cooler, purer water.  Once it emerged from the ground it was routed atop the Aqua Claudia to save building another arcade.  The Anio Novus channel can be seen above the Aqua Claudia where the arches have broken.  When in use the channel had a roof, though both channels were vented to free air. 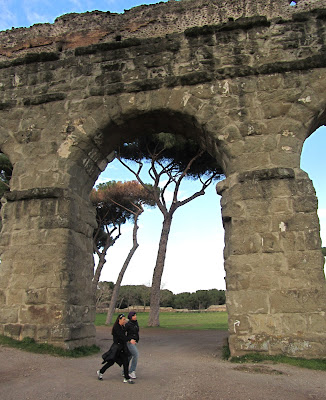 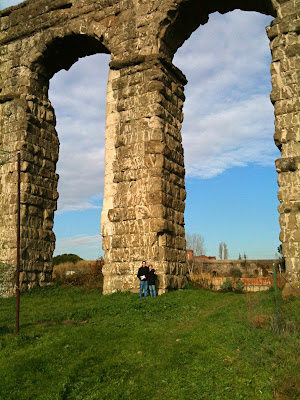 Another set of arches seems to climb out of the ground in the parco, though of course really the ground is dropping away.  This was once the Aqua Marcia, much older—140 BC— and said by ancient authors to have had the best water of all.  It also came from high in the hills, traveled about 90 km, and supplied about 50 million gallons a day.   Channels for two other much shorter aqueducts, the Aqua Tepula and Aqua Giulia, were later piggybacked atop the Aqua Marcia, and hints of those can be seen in a few places.  But driven right through the old structures is a much more recent aqueduct, the Acqua Felice, which takes its title from the given name of Pope Sixtus V, Felice Peretti.  In 1586 he built the first new acquedotto in Rome in 13 centuries.  The Felice is still in operation, so its arcade continues uninterrupted, getting taller as it goes. 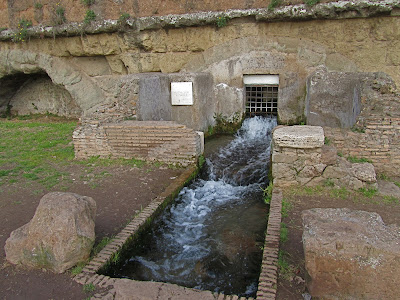 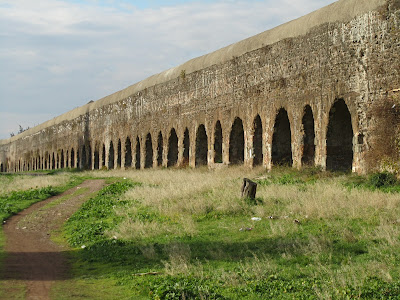 At the northern end of the Parco degli Acquedotti the ancient Aqua Claudia and the Aqua Marcia cross paths, and when they do, the 16th-century intruder Acqua Felice shifts over and starts using the Claudia arches instead as it continues into Rome.  A well-preserved stretch of full-height arcading remains a few kilometers down the road near Via Tuscolano in what is a usually-closed private park area owned by the Bank of Italy.  (Access is tightly controlled because located there is the facility where used currency is destroyed, and many millions of Euros may be on site at any time.)  Recently I was able to join a rare guided tour of this aqueduct section thanks to FAI (Fondo Ambiente Italiano), a group dedicated to preserving Italy’s patrimony.  Here the Acqua Felice bores right through the old Aqua Claudia pillars and the repairs done to strengthen it by Hadrian.  A medieval-era house that had been built into one of the arches also fell victim to the Acqua Felice as it burrowed right through the main living level. 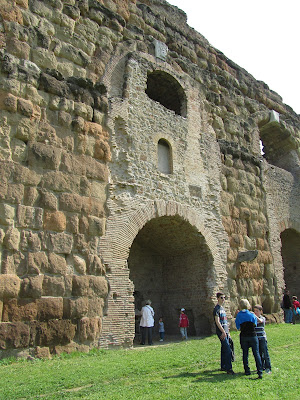 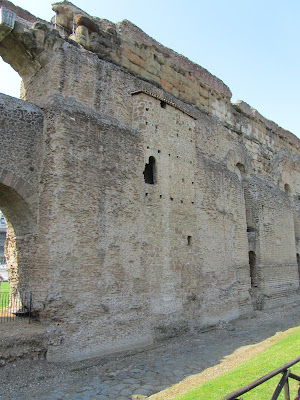 For me the wonder of these aqueducts lies not only in their longevity and suggestive beauty but equally in the sophisticated engineering they evince.  Here are problems that Roman engineers had to solve:

1. After selecting the mountainside water source and the end of the line in Rome, determine the difference in elevation between them.

2. Decide on the desired overall slope of the aqueduct balancing the need to keep it always flowing downhill but not flowing so fast that the force can blow apart the structures.  The Anio Novus for example drops 330 meters (1082 feet) so in theory might develop about 1000 psi at the bottom if it ran straight downhill.  So it meanders enough to add friction and to reduce the slope to less than a half inch down in ten feet of travel (0.38%).

3. Survey a path for the water channel using little more than sticks and plumb-lines aligned by eye and mechanical levels, with three quarters of the channel underground, that will result in the desired length and slope overall.

4. Dig perhaps 40 miles of ditch and tunnel using iron and bronze tools following the planned route and slope, then line it all with stone where necessary and waterproof it with hydraulic cement.

5. Build many miles of stone arcades to carry the aqueduct the last stretch into the city, maintaining the necessary gradient.  (This includes quarrying, shaping and moving thousands of tons of stone to the building site.)

6. Add settling tanks, interconnect channels, distribution towers, piping and thousands of fountains and outlets, each with a device to control the rate of flow.

The more I think about it the more awed I am by the accomplishments.  And in some ways building the long lines of arches that we marvel at seems like the easiest task in that list.