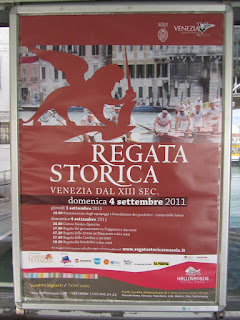 The first Sunday in September each year features the Historical Regatta on the Grand Canal in Venice.  By good fortune we were invited by friends to watch this spectacle from the Palazzo Loredàn dell’Ambasciatore where they were staying in rented apartments.  The palazzo was built in Gothic style in the late 1400s and is on the Dorsoduro side of the Grand Canal about half way between the Accadèmia bridge and palazzo Ca’ Fóscari, where the boat races finish.  Because it is so costly to maintain these palazzi, many have been converted into hotels or divided into vacation apartments.  Often one or more floors are leased for art or commercial displays.  Somewhat incongruously it seemed to me, the ground floor and back garden of Palazzo Loredàn currently feature a few large sculptures by a New Zealand artist, several of which include grand pianos.  In fact there were a couple of women pianists from N.Z. who took turns playing Beethoven sonatas and other classical works on a huge red piano sculpted with Maori symbols.  Here are some pictures of the palazzo, including one taken during the 1928 Regata Storica. 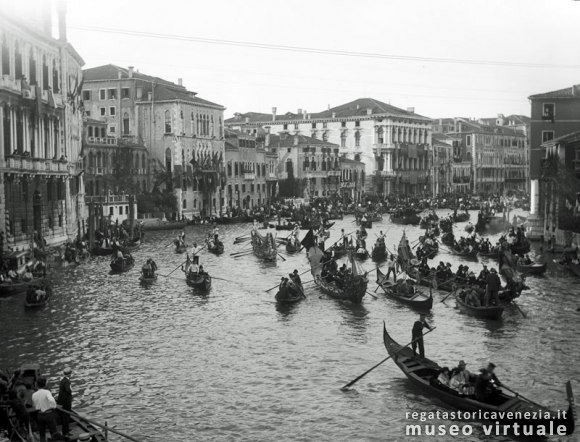 You should know by now that you have to take a little history lesson before I get to the main event.  The Venetian regattas likely date back at least to the 1300s, when commercial and military mariners of the Republic held impromptu contests among themselves to relieve boredom and just for fun.  The authorities saw an opportunity to maintain physical readiness and conduct training with the result that formal races were organized.  Our word “regatta” comes directly from the Venetian “regata” meaning a competitive event raced in boats—which in turn may come from “riga” (line), “aurigare” (to compete in a race), and/or “ramigium” (rowing).


In centuries past races were often timed to religious or civic festivals.  The first regatta for women rowers seems to have been in 1493 in honor of the visiting wife of the Duke of Milan, Beatrice d’Este, and though not always a part of the larger regattas, women continued their competitions.  The intervention of Napoleon, the Austrians and other vicissitudes of history have interrupted and altered the races over time, but in 1841 they were formalized to the current system, più o meno.  Here are a couple of historic photos showing the vast attendance along the Grand Canal in 1897, and a regata delle donne (race of the women) from 1932, apparently before they had become accepted competitors in the regular line-up.  These days there are regattas of various kinds several times during the year, including one, the vogalonga, with a course of about 18 miles, from the bacino di San Marco in central Venice out to the island of Burano in the northern lagoon and back.  That’s a lot of rowing.  Incidentally, the standing position for Venetian rowing followed from the need to keep the eyes as high above the water as possible to pick out the channels through the shoals, bars and shallows of the lagoon. 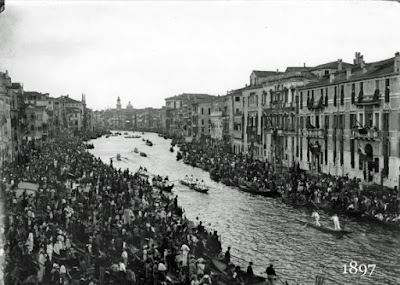 The event we attended is known as the Regata Storica in part because it includes processions of historic craft, both practical and formal.  First the Grand Canal and the busy Basin of San Marco waterway past Piazza San Marco out to the public gardens is closed to general traffic.  So all the tour boats, vaporetti water buses, private water taxis and commercial barges and scows tie up or clear out, leaving an eerily calm and quiet scene on the water.  Then the corteo (procession) begins with various working boats:  barges bringing produce to the market, a small sailing fishing boat, a peasant family.  [I apologize for the rather dim photos.  The heavy overcast and occasional sprinkles kept the rowers cool but did nothing good for the photographic record.] 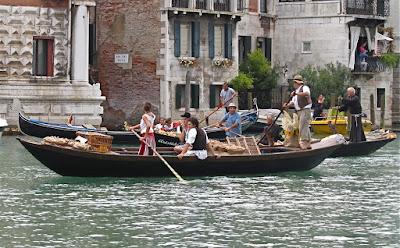 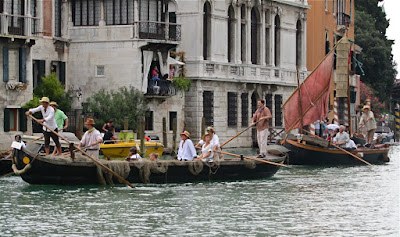 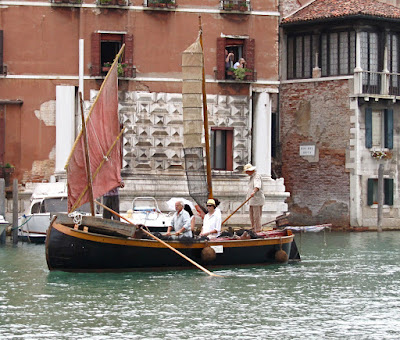 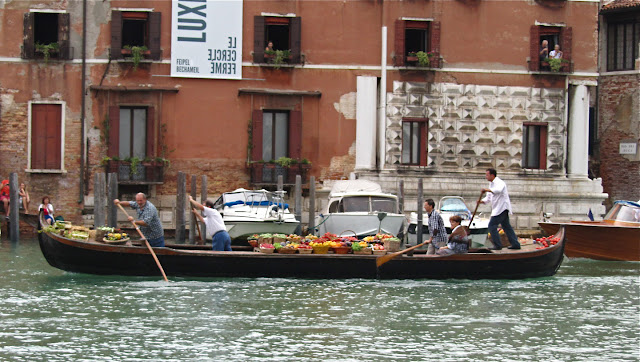 A nice selection of ceremonial boats and those of nobility followed the peasantry, including four 8-oared galeoni with lustrous gold or silver sculptures at stem and stern.  Many of these fancy craft are maintained and rowed by schools, clubs or cities around the Venetian lagoon. 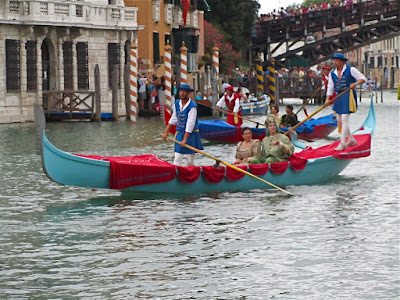 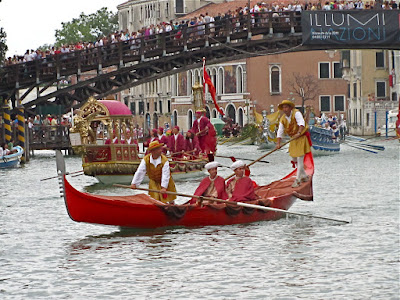 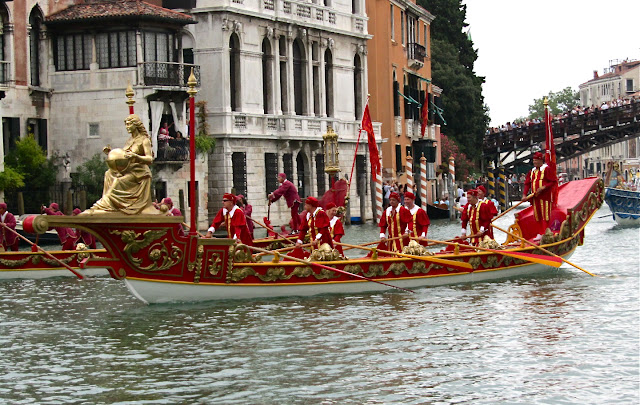 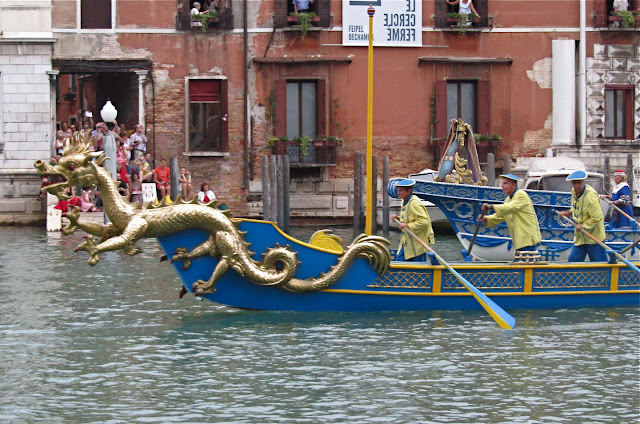 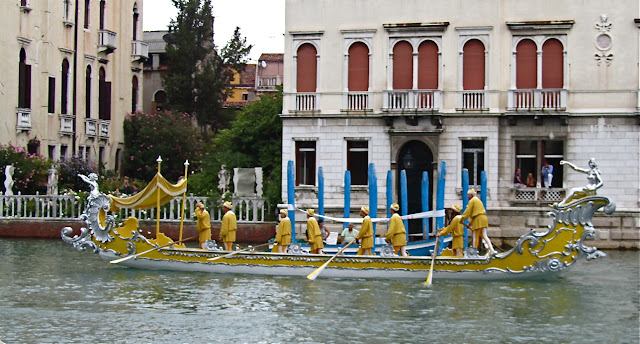 Next came dozens and dozens of boats in many styles from rowing clubs. 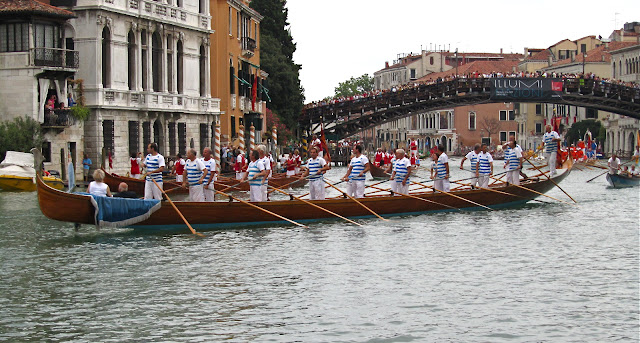 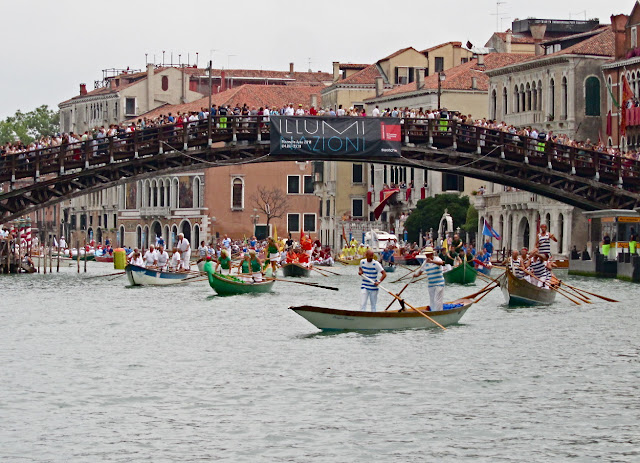 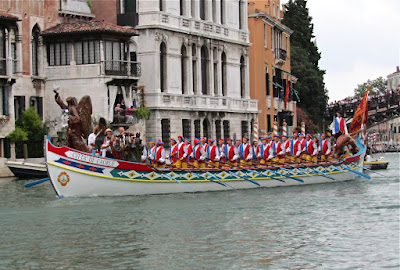 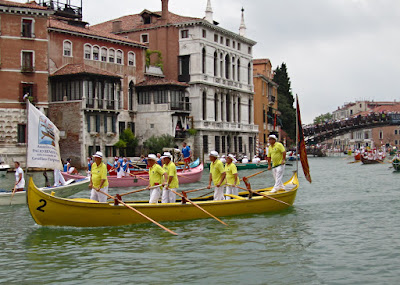 Finally came the true regate, the races.  There were three short ones for kids 10-14 years old out of our sight down by the Rialto bridge, but the four main contests went right past us, having started over a mile away to our right near the public gardens.  They continued around the bends of the canal, under the Rialto bridge, around a turning point down near the train station, and back to the finish line to our left at Ca’ Foscari having covered perhaps 3 miles all told.  Here is a link to a page describing the various kinds of boats in the races, the pupparin rowed by two young men, the mascareta for two women, the caorlina with six oarsmen (the stern starboard oar also steers), and finally the light and quick gondolino for two men.  In the first pictures below can be seen the finish pavilion, or machina, that was set up on a barge to our left.  (Also trucks and equipment of the Italian TV system RAI on another barge.) 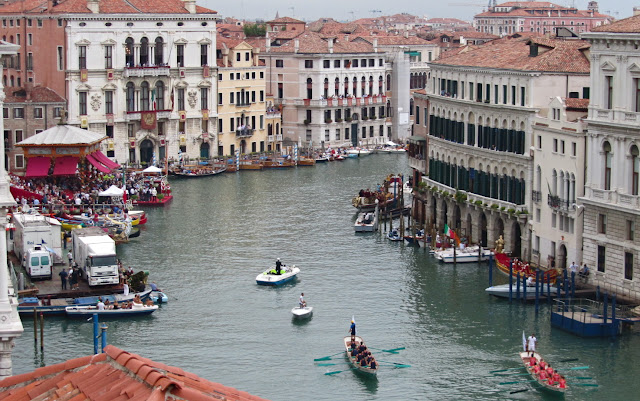 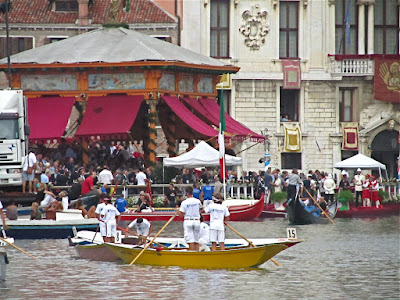 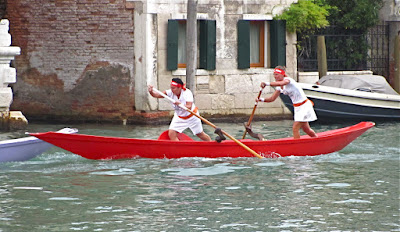 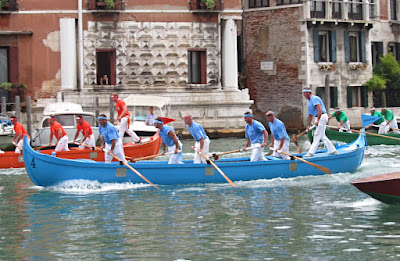 It’s a minor point, but I was engaged by the boat colors.  The nine colors are celeste (light blue), viola (lavender), arancio (orange), verde (green), rosa (pink),  canarin (canary yellow), marron (brown), rosso (red), and bianco (white).  In order to forestall a perception that one particular color seems fated to win year after year, each team’s boat is repainted to a new color each year.  Another set of colors are used for the bandiere (pennants) given to the top four placing boats: 1st is red, 2nd white, 3rd green, and 4th blue.  Before the unification of Italy in the 1860s, when the red, white and green of the Italian flag became popular and patriotic, the pennant colors were, in order, red, light blue, green and yellow (adorned with a pig for sluggishness). 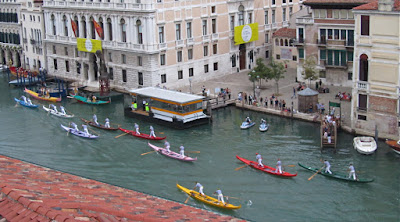 The next day the Grand Canal was back to normal, boats of all kinds going in all directions. 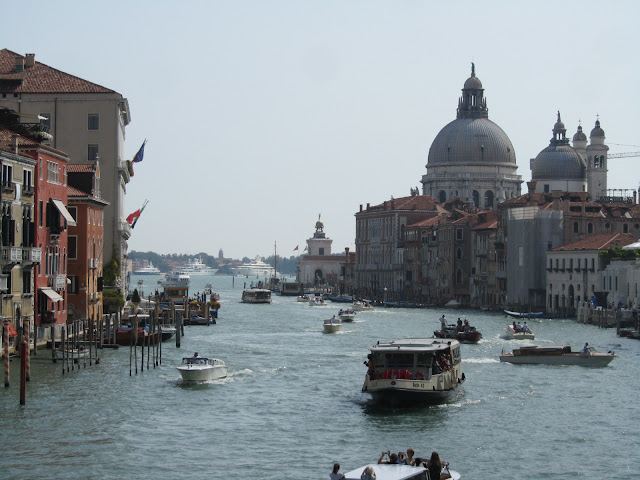