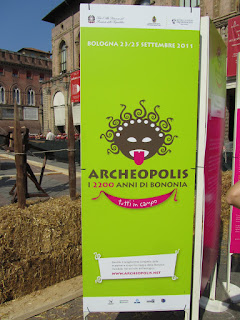 This weekend in Bologna the city was celebrating Archeopolis, the 2200 years of Bononia.  During ancient Roman times, Bononia was the name of the city founded here in 189 BC.  The name probably derives from the Celtic tribe that lived here with the Etruscans before Rome came along, the Boii.  The city is also celebrating the 130th anniversary of the civic museums, so all the museums were free, too.
As a reminder of the antique patrimony, a Roman military encampment from the time of Nero (1st c. AD) has been created in the middle of Piazza Maggiore.  By coincidence, the restoration scaffolding that still hides part of the front of the Basilica di San Petronio was opened to the public starting Saturday.  So for €3, one can climb the steel stairway behind the decorative graphic shroud, getting a very close look at the building on the way up and previously impossible views from the top platform, 75 feet above the piazza.
The camp is peopled by men (mostly) whose hobby is recreation of that period.  The uniforms and everything else are as accurate to the era as possible, and small displays within the precinct show the skills and specialties involved.  A couple of times a day the troop forms up and marches, then creates the testudo defensive formation in which the semi-cylindrical shields are held above and slightly overlapping to create a tortoise shell over the entire group.  It is a tactic credited for many Roman military successes.  I missed getting a picture, but I’ve plopped in one from the Internet. 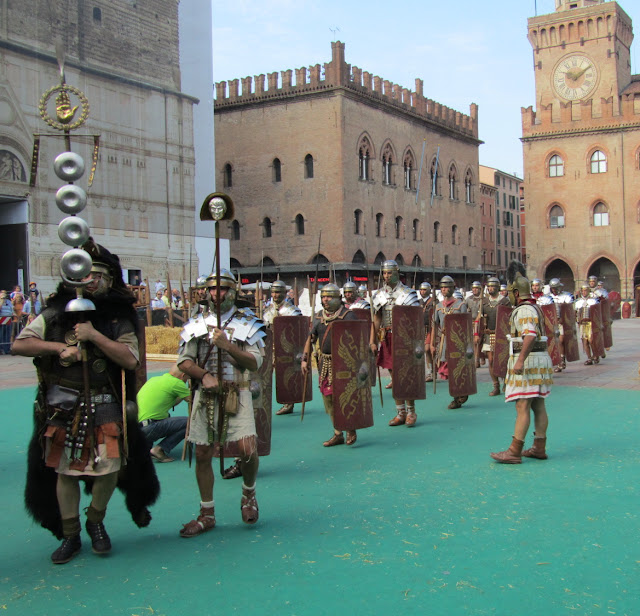 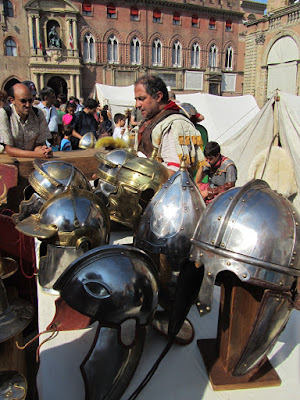 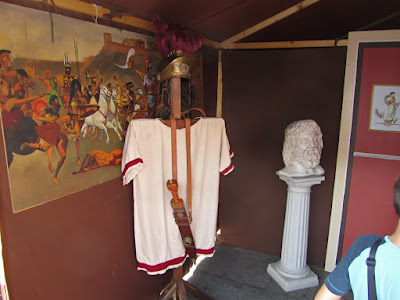 The Bologna Archeological Museum is full of Roman artifacts.  Here are a few of the bits and pieces of ancient Bononia that have come to light here in modern times.

Maybe the most prominent remnant of the Roman period is the basically rectangular street layout in the center of the city.  Strada Maggiore, which follows the Roman  via Aemilia, runs straight as can be through the center.
But because the city has been constantly inhabited and always heavily built up, remains of Roman buildings are uncommon.  An ancient theater was found during reconstruction excavation between via Barberia and via Collegio di Spagna, some original paving stones can be seen near the Medieval Museum on via Manzoni, and we saw Roman foundations below the streets on our tour of acqua sotto le strade, but most findings have come from outside the old walls.  So it's appropriate that we get a reminder of some distant history that's not quite as obvious as its medieval and later descendants.
Roberto
Posted by Roberto at 8:10 PM