How was it?  What did you learn?  What was the best part?  What will you miss?  Are you going back?  These are a few of the questions we get about spending our year in Italy, and I’ve been trying to figure out whether I know the answers.  Certainly I can say we’ve had a great time.  Most of our expectations were met and our plans worked out— tocca ferro (touch iron, the same as knock on wood), we’re not home yet.


We’ve learned that no matter where you go and how much research precedes your visit, there is more to see and do than you expected: music concerts, film festivals, patriotic and religious holidays, parades, museums, exhibitions, archeological and historic sites, public markets, enticing shops, places to eat and things to eat.  We’ve learned to make allowances:  for museums that don’t keep the published hours, for buses that don’t come on schedule, for motorcycles that ooze through stopped traffic like lava and erupt across intersections the instant the light changes, for concerts that never start on time, for the occasional sciopero (strike), for city noises from trams and ambulances and for occasional excess rumore (noise) from our neighbor’s TV or festa (party).  We’ve learned to get along pretty well using the Italian language, though the telephone can still be daunting, especially if you get a recorded message.  And we’ve learned to appreciate the restaurant waiters and shop clerks who let us carry on in Italian even though their English is better than our Italian.

The best part of our stay has been the luxury of having so much unstructured time, of not being pressed to cram every minute with touristic activity;  so we could balance a day of museum-heavy sensory overload with one of leisurely reading or walking around the city.   More explicit “best parts” include the daily dose of church bells; the ubiquity of antique and ancient architecture, whether medieval porticoes in Bologna or random Imperial-era columns and bits scattered about Rome; and the infinity of wonderful food shops and markets with seductive arrays of produce, cheese and prepared dishes da portare via—to take away.  Then there was the day that the assistant in our local cheese shop asked Cinzia if she wanted her cheese vacuum-packed for taking out of the country.  It was so gratifying when the owner spoke up and said, “No, no, no!  È di Roma!”—She’s from Rome! 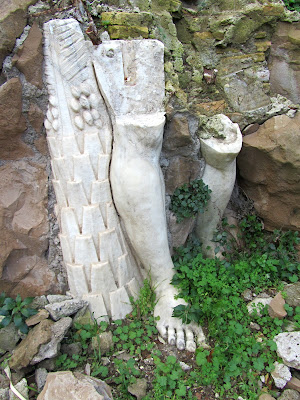 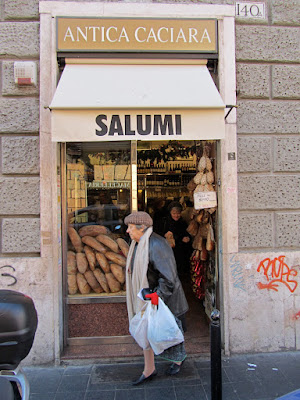 What will we miss once we’re back in California?  The caffè, meaning both coffee and the place you drink it.  Not that  you can’t get a good cappuccino and pastry in the U.S., but in Italy it is hard to walk more than a block in most cities without passing at least one caffè where the service is fast and the coffee is excellent and inexpensive.  I know I’ll never find cappuccino for $1.50 once we’re home, served in real china in under two minutes by a barista who is helping half a dozen other patrons at the same time.  We’ll also miss having daily access to  open-air markets and local specialty shops where the vendors know us.  After coffee here in Florence we often stop in Piazza di Santo Spirito to buy from Rosa, who has been bringing things from the family farm just south of the city for 45 years.  And in Rome, aside from the kind cheese seller in Antica Caciara, there was Stefano for fruit and veg in Piazza di San Cosimato and the effusive signora in the pescheria there who always had a sincere buongiorno for us whether we were buying fish or not. 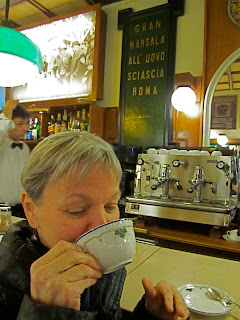 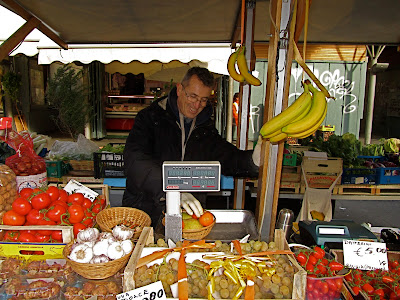 Even though California has plenty of good wine, we’ll miss the super abundance of inexpensive vino available in Italy.  The wine shops and grocery stores have hundreds of possibilities, with the good ones starting at €3 and excellent vintages from about €15 ($19).  There are also shops that sell vino sfuso, where you can bring in your empty bottle and have it filled from their stainless vats.  There’s one right around the corner from our apartment.  For our “house” wines we can get quite nice Cabernet Sauvignon or Sangiovese for under €3.

Although I will admit that our area of California is culturally rich, we will miss the wealth of free and inexpensive concerts that we’ve enjoyed in Italy this year.  Bologna’s many music schools offered opera, piano and other instrumental recitals in charming settings around the city, with performers who seemed too young to be so good.  Rome has hundreds of churches with nicely reverberant acoustics, and many host visiting performers from around the world; the same is true in Florence.  (I don’t know where but in Italy we would have come across concerts for fisarmonica in every city we lived in.  We heard the woman in this link in the church of Sant’Antonio Portoghese in Rome.)

I can’t leave the ‘what we’ll miss’ category without mentioning gelato.  In hot Bologna last summer we ate it at least once a day, and we’re pretty much doing the same now in Florence.  We have two great shops near our apartment that both offer unusual flavors—such as melon, pink grapefruit (pompelmo rosa) or sesame with swirls of dark chocolate—for under $2 a cup.  And of course they have luscious limone, frutti di bosco, fragole, pesca and amarena (lemon, wild berries, strawberry, peach and sour cherry).  It’s much lower in fat than U.S. ice cream and has a delightful-on-the-tongue silky texture.  Yes, we’ll miss gelato a lot.

Several of our friends in the States have asked how the Euro economic crisis has affected us during our yearlong stay in Italy, and what evidence of it we see around us.  The answer is that for us the biggest impact has been the increase in the value of the US dollar against the Euro.  Last June when we arrived the exchange rate was $1.45=€1.00.  A year later it is $1.25=€1.00.  So at the bancomat (ATM), a €350 withdrawal costs me $70 less now.  That’s a lot of cappuccini. 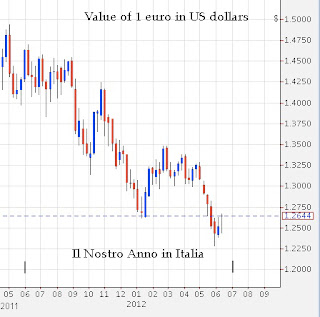 The sales tax on most things went up 1% last fall as part of the effort to balance Italy’s budget, but we can’t easily see that because the sales tax (a value-added tax called IVA here) is not listed as a separate item on receipts—it’s incorporated in the marked prices on the shelf.  The IVA rate is typically 21% (scheduled to go to 23% in Sep. 2012) and applies to almost everything.

One commodity price that has gone up noticeably is automobile and truck fuel.  Last summer when we rented a car in Turin, the diesel was about €1.62 per liter.  Last weekend for a trip to Umbria the fuel was €1.90 per liter—about $9.00 per US gallon (including a 2¢/liter tax to help pay for earthquake relief in Emilia-Romagna).  The favorable currency exchange rate difference just about balanced the price increase for us, but Italians are paying about 17% more to fill their tanks than last year.  As a result most prices for food and everything else brought by truck to markets and stores has gone up as well, though often the rise has been so slow that it’s hard to see from day to day.

Fuel prices are one of the reasons so many Italians ride motorcycles and scooters or drive small cars.  Here in Florence there are long stretches, sometimes whole blocks of street parking reserved for motocicli, and they are often all full.  In TV commercials tonight in less than two hours I saw ads for 5 different small cars, priced between €7,900 (Peugeot “107”) and €10,125 (Ford “Fiesta”).  For a similar reason, photoelectric arrays have sprung up all over the place.  From trains and highways you can see lots of PE systems laid out in vineyards and wheat fields, on schools, factories and some houses.  We pay about $0.45 per KWH of electricity here (over 4x our U.S. rate), which may explain the lack of electric clothes dryers, the timers on apartment building stairwell lights and why some elevators cost €0.10 per ride. (Better have that dieci centessimi coin handy to drop in the slot or else head for the stairs.) 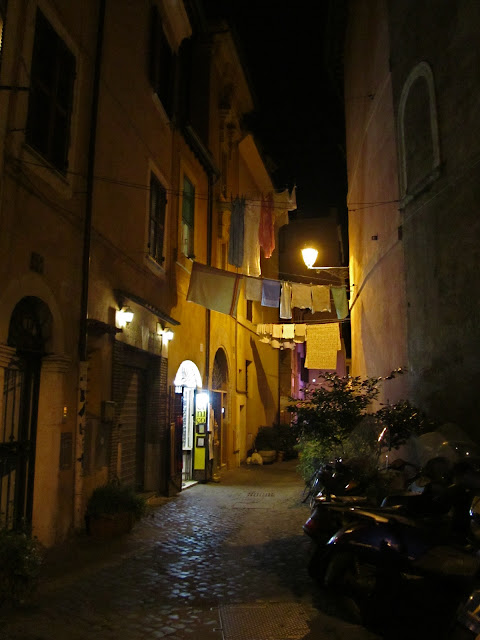 Finally, will we return to Italy?  Certamente!  Certainly!  But when and for how long a stay we can’t say.  I’d like to think this was a dress rehearsal for another lengthy stay, but economies, both ours and the world’s will have to settle down a bit first.  A permanent move to Italy doesn’t seem likely, especially considering the newly imposed worldwide wealth tax on Italian residents and the onerous bank account and tax-reporting requirements.  Meanwhile, I have over 13,000 pictures to sort through and several topics never explored that I would like to add to this journal.  So whether we’re physically in Italy or not, we’ll be here in spirit. 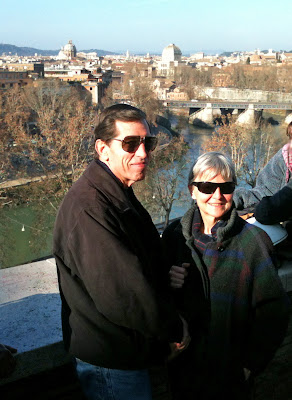