Hard stones.  That’s what pietre dure translates to in English.  What it means in the field of decorative arts is more complex:  colored semiprecious stones sliced, shaped, joined and polished to create figures, pictures and geometric designs like the one above which are inlaid into wall panels, table tops and other furniture.  It is something like marquetry, pictorial panels formed from colored wood veneers, but wood is pretty easy to cut, and it is mostly not too expensive or hard to obtain.  Pietre dure (pea-EH-tray  DO-ray), sometimes called Florentine mosaic, is made of unique slices of stone, each puzzle piece carefully selected for color, shading and patterns from among hundreds of often-rare varieties collected all over the world.  And most astounding to me is that it was all cut by hand, to a standard of perfection that seems impossible.

The ancient Romans produced some remarkable pictures in shaped, colored stone, called opus sectile.   By the 16th century marble workers in Rome had developed the elaborate and highly precise inlays that are sometimes known as pietre tenere—soft stones—since marble is comparatively easy to work.  As the Renaissance interest in nature and art developed, members of the Medici family in Florence opened a workshop to fashion remarkably accurate pictures of birds, flowers, fruit and scenes in polished stone.  A great many of the colored stones they used were salvaged marble excavated from Imperial Roman ruins; but after craftsmen in the Florence workshops discovered methods for working them, more exotic, denser minerals and gemstones were introduced and dure—hard—was added to the description.  The Grand Ducal workshops established by Ferdinando I de’ Medici in 1588 continued to produce pietre dure for 300 years in Florence, and they still exist in the form of the Opificio delle Pietre Dure, which is both a museum and a restoration facility.  Unless otherwise noted, all my pictures were taken at the Opificio museo. 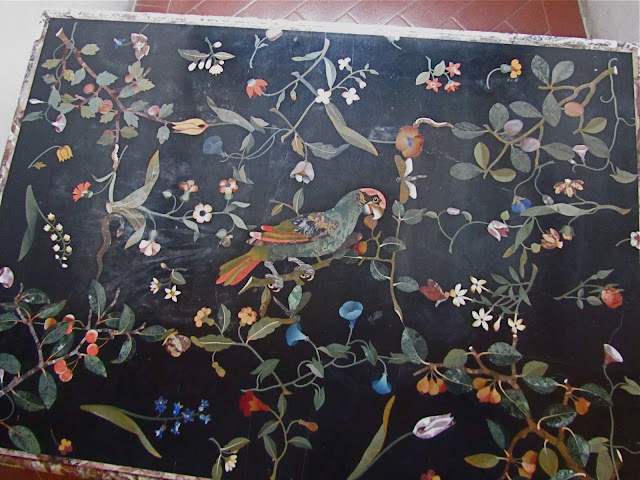 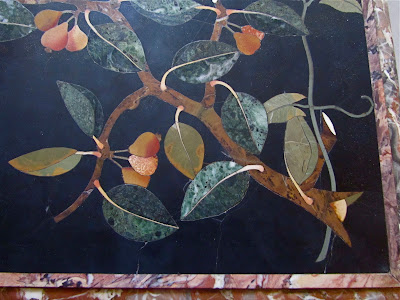 Aside from having some of the most beautiful and accessible examples of the art, the Opificio museo includes remnants of the old workshops, including tools and over 500 samples of semiprecious stone.  Seeing the simple iron-wire hand saws and files that cut all that rock so precisely made me shake my head in wonder.  Slices about 2mm thick (less than 1/8”) were cut from salvaged Roman decorations or from quarried blocks that might have come from India or Afghanistan.  A wire lubricated with an abrasive slurry slowly sawed its way through.  Then the slice was polished with a succession of ever-harder rock powders before being marked with a template and clamped in a vise.  The artisan then used a bow-saw with one hand and with the other fed abrasive powder onto the wire from a spatula.  He could cut about a centimeter (4/10 in.) in five minutes.  What amazes me as much as the time invested is the precision that was achieved.  The intricate joints between adjacent components are perfection.  Often it is only with great difficulty and using oblique, glancing light that the seams can be detected.

Some of this work is known as commesso, where the picture is built up on a hidden slate backing.  Landscapes and other pictorial scenes, like the ones of Painting or of the Pantheon below, were often done that way.  For tabletops and large panels the common method is intarsia, where the colored compositions are inlaid into a solid slab, often black marble, by carving out an exactly matching cavity.  Sometimes speckled, purple porphyry was the base, an incredible carving challenge since it is among the hardest of stones.   An adhesive made from pine resin and wax, applied hot, was used to glue the designs in place. 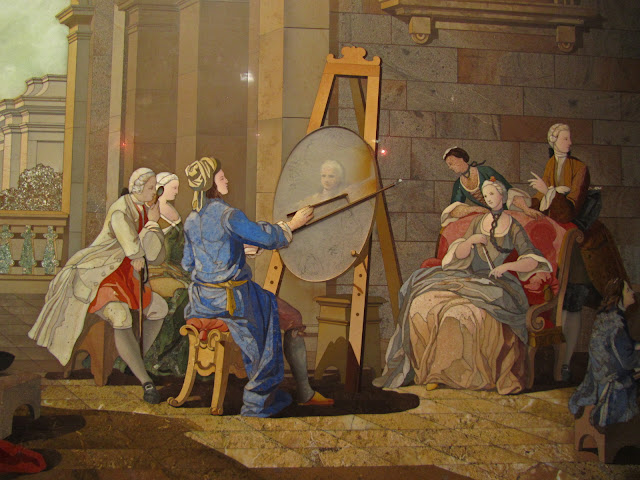 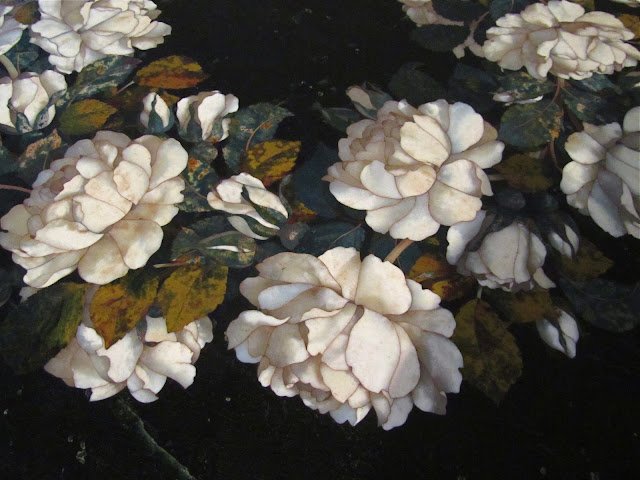 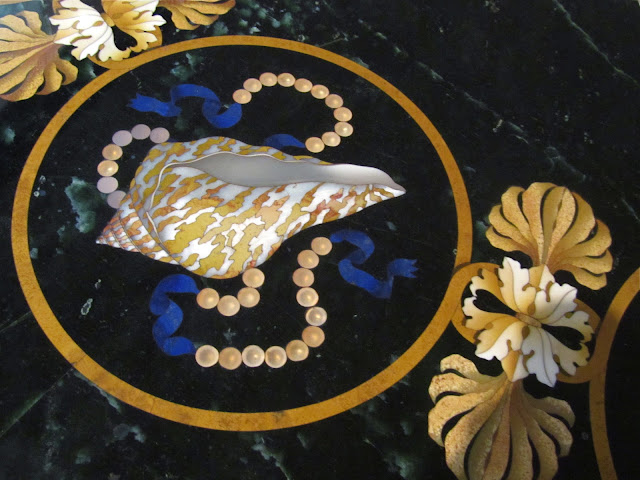 Here are a few more pictures I just couldn't leave out.  If this subject grabs you, there is an excellent book you may be able to find in a good library, Pietre Dure, Hardstone in Furniture and Decorations, by Anna Maria Giusti, translated from Italian by Jenny Condie and Mark Roberts.  Philip Wilson, 1992  ISBN 0 85667 405 2.  It is full of great color photos (that are free of the reflections that sometimes afflict mine). 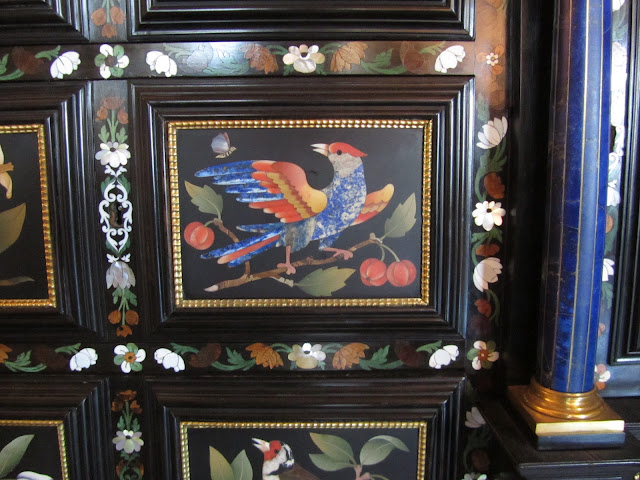 There are shops in Florence that sell pietre dure panels produced by modern craftsmen.  I don’t know what tools or methods they use, but to my eye they do not equal the quality of the centuries-old museum pieces.   In the Opificio museo there are 20 tabletops hung on the wall, the last commercial production of the workshop late in the 19th century, work that went unsold.  Amazing.  I would have bought one.... 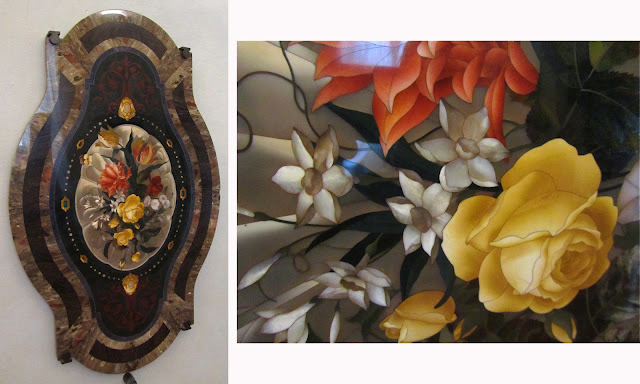 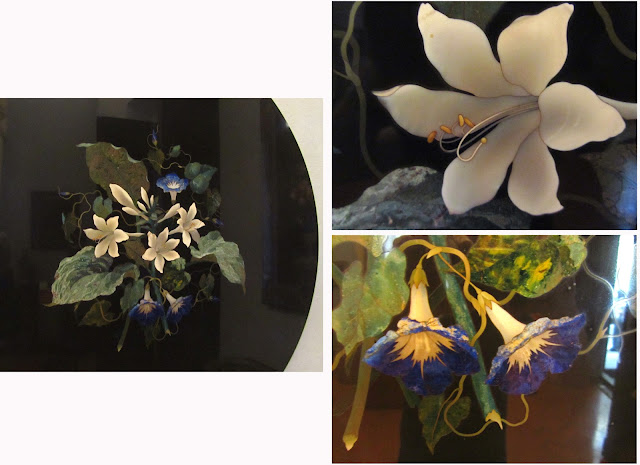