We visit many churches in Italy because they embody lots of history and art.  Although most have sculpture,
wall and ceiling frescoes, or paintings by noted artists, lately I’ve been drawn to the colorful floor pavements known as Cosmati.

What are they?
Cosmati floors, also called Cosmatesco or Cosmatesque, are a particular form of what archeologists, architects and art historians call opus sectile (cut work) where pieces of stone are cut to whatever size and shape is required to create geometric patterns when fitted together.  Roman and Byzantine mosaics, termed opus tessellatum, are pictures and designs created from small, more or less uniform size pieces of colored stone and glass called tesserae.  The progression from mosaic to Cosmatesque reflects both technical discoveries and evolved tastes in decoration. 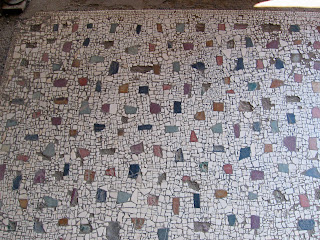 The characteristics of Cosmati work include:
1) Complex assemblies of simple shapes like triangles and squares in repetitive designs, often featuring red and green stone; 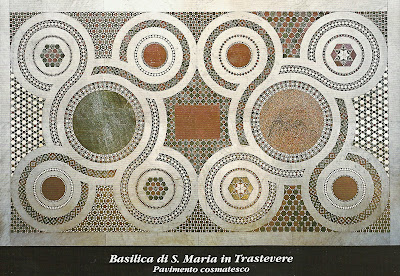 4) Wide bands of white marble between the colored features to make them stand out; 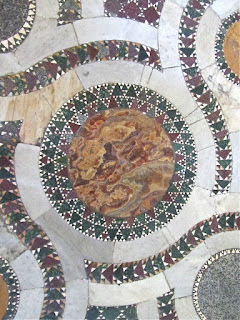 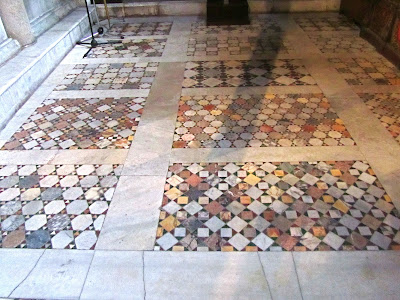 Why are they called Cosmati?
In the later 12th century an artisan in decorative stone near Rome named Lorenzo di Tebaldo adapted Byzantine and ancient Roman styles of geometric floor design to produce a distinctive style.  At least, he and several further generations of his family were credited by 19th-century art historians with developing the style, which was named Cosmatesque after Lorenzo’s grandson, Cosma—apparently Cosma’s name appeared on many of the works studied at that time.  Despite later scholarship that has brought to light the earlier workshops of Magister Paulus (from about AD 1100) and other early marblers (marmorari), and the existence of older work in Sicily, for better or worse the collective name for artists in this arresting art form is now Cosmati.  (Cosma himself was apparently named for Saint Cosma, not for the Greek word that means decoration.)

Why did Cosmati work develop in Rome?
In medieval times when the Cosmati were at work, their marble and other stone came from the ruined temples and buildings of ancient Rome.  The extraordinary disks that mark their work come from salvaged columns carefully sliced.  Buried statues, fallen slabs and inscription panels were dug up and turned into millions of pattern pieces and frames.  Aside from creamy whites, the primary stones used were both green and reddish purple porphyry, though yellow  giallo antico and many other colored marbles show up as well.   The designs and patterns used are very similar to those found in Constantinople and other Byzantine sites.  It is thought that Eastern mosaic craftsmen brought in to decorate the Monastery of Monte Cassino south of Rome in the late 11th century may have inspired the style that became known as Cosmati work.  So perhaps it’s no coincidence that Magister Paulus had his workshop nearby in Ferentino.

Is all Cosmati work in Italy?
No, though most is south of the Alps.  But in the last few years an extraordinary Cosmati floor in Westminster Abbey in London has been restored.  It was originally installed in 1268 by a Roman marbler named Pietro Oderisi, who may have brought most of the pattern stones with him pre-cut for efficiency.  One big difference from the typical Italian work is that instead of white background framing marble, the Westminster floor uses dark Purbeck marble from the south of England.   Uniquely, the Great Pavement at Westminster also came with inlaid brass inscriptions.   Aside from the date and dedication it provides a chronology for the end of the world and reveals some of the symbolism entailed in the stone patterns.  More about the floor restoration and its cosmic patterns and symbolism can be found at the Abbey website and elsewhere on YouTube. 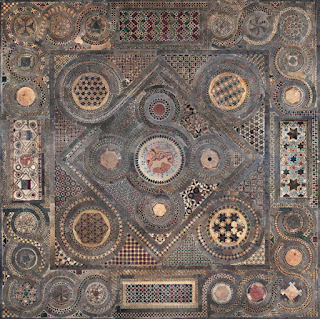 Why do I like this patterned work so much?
I’ve always been a sucker for color, so I love the beautiful stone combinations spilling across the floor.  The swirling ribbons and unexpected complexity of the fillings make a concise orderliness on the large scale from an otherwise chaotic diversity of small designs.  In some ways it reminds me of a Baroque fugue in which small musical segments swirl together to create a satisfying and perhaps profound unity.  Beyond those esthetic charms, having worked with marble and granite I appreciate the labor, skill and precision embodied in those millions of hand-cut, hand-set and hand-polished rocks, most of which had a previous life in some Imperial Roman monument or statue.  It is some of the most pleasing and exquisite recycling you’re likely to find anywhere.