After wishing the baristi at Baylon Cafè buon anno this morning, we are spending the first day of 2012 mostly in repose, being cheerful, eating sweets and doing a bit of work to set the tone for the year to come.  These are all Roman traditions dating back at least two millennia as recorded in the Fasti, a long poetic work by Ovid from about A.D. 8.   On the kalends of ianuarius, January 1st, the poet has a conversation with the god Janus (who gives his name to the first month of the year) discussing the meanings and reasons for various customs of the day. 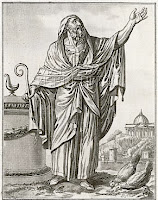 A prosperous day dawns: favour our thoughts and speech!
Let auspicious words be said on this auspicious day.
Let our ears be free of lawsuits then, and banish
Mad disputes now: you, malicious tongues, cease wagging!
...
‘But, why are joyful words spoken on the Kalends,
And why do we give and receive good wishes?’ [Ovid asks.]
Then leaning on the staff he gripped in his right hand,
[Janus] answered: ‘Omens attend upon beginnings.
Anxious, your ears are alert at the first word,
And the augur interprets the first bird that he sees.’

Italians wish you tanti auguri (much good fortune) deriving from the ancient Roman augur, the official interpreter of signs and portents—the auspices—who would forecast your good fortune (or bad).  So, many of the customs for the new year strive to align as many omens in your favor as possible, in the belief that what happens on the first day of the year will be repeated throughout the coming months.  So you want happiness not discord, food not hunger, and fulfilling work not idleness.

Ovid does not explain why it is good luck to see a stooped old man but bad to see a priest or child in your first encounter with another person in the new year.  Nor does he cover the now popular practice of wearing new red underwear on New Year’s Eve then throwing them away, though other Italian traditions say that red wards off the evil eye, malocchio.  But he does ask Janus about gifts of sweets and money.  For money, the 2000-year-old answer hits amazingly true to our times.

‘What do the gifts of dates and dried figs mean’,
I said, ‘And the honey glistening in a snow-white jar?’
‘For the omen,’ he said, ‘so that events match the savour,
So the course of the year might be sweet as its start.’
‘I see why sweet things are given. Explain the reason
For gifts of money, so I mistake no part of your festival.’
He laughed and said: ‘How little you know of your age,
If you think that honey’s sweeter to it than gold!
I’ve hardly seen anyone, even in Saturn’s reign,
Who in his heart didn’t find money sweet.
Love of it grew with time, and is now at its height,
Since it would be hard put to increase much further.
Wealth is valued more highly now, than in those times
When people were poor, and Rome was new....
...
But ever since Fortune, here, has raised her head,
And Rome has brushed the heavens with her brow,
Wealth has increased, and the frantic lust for riches,
So that those who possess the most seek for more.
They seek to spend, compete to acquire what’s spent,
And so their alternating vices are nourished.
Like one whose belly is swollen with dropsy
The more they drink, they thirstier they become.
Wealth is the value now: riches bring honours,
Friendship too: everywhere the poor are hidden.
[Ovid, Fasti, Book I.]

Thus, one Italian custom is to not take anything out of your house on capodanno, only to bring things in so that the pattern of accrual is set up for the year, not loss.  And many of the traditional foods in holiday meals are symbolic of money or increase—salami slice “coins," lentils that look like tiny ancient coins, and rice that swells as it cooks. 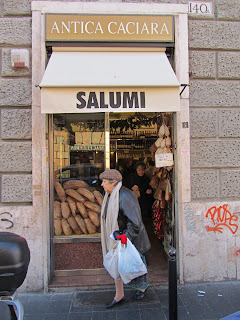 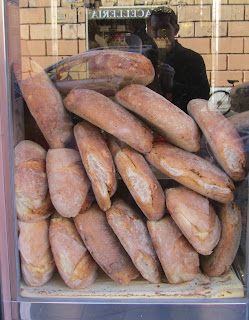 But yesterday was a different story from this capodanno day of ease, instead, a time to finish up shopping for the classic big feast, il cenone, and the New Year’s party,  il Veglione di Capodanno.  At night the city of Rome threw a big public party on the Via Foro Imperiali, just north of the Colosseum.  There was a giant stage, music and comedy acts and il sindaco, the mayor, to pop the cork from a bottle of spumante at midnight.  Then they had a big fireworks show, fuochi artificiali.

We decided to skip the loud music, hundreds of thousands of people and the long walk there and back.  Instead, just out our door is the Gianicolo, the Janiculum Hill (also named for Janus, the god of doors and arches, because it was the portal from ancient Rome to Etruria).  It has any number of vista points overlooking the city, ideal for watching fireworks.  We weren’t sure quite what to expect as we walked up to the Acqua Paolo or Fontenone near the Spanish ambassador’s villa.  Firecrackers (botti) had been going off for days, with increasing frequency and force as the 31st neared.  The TV news had shown enormous caches of illicit explosives confiscated in recent days and some rather alarmingly large firecrackers for sale.  And we had read of the lively amateur fireworks activity on New Year’s Eve throughout Italy, so we weren’t too surprised by the bangs and booms reverberating off stone walls and occasional small bottle rockets whizzing into the frigid night.  The crowd near the big fountain was large but good-natured, with frequent bursts of botti and occasional spurts of Roman candles or sparkly fireworks fountains set off in the street.


But the Spanish enclave buildings and the entrenched crowd were blocking our view, so we went back down to the terrace in front of the church of San Pietro in Montorio, where all of Rome was erupting before us.  It was amazing.

They had started even before mezzanotte with some pretty serious aerial rockets from scattered places around the city.  At the stroke of the new year pandemonium broke out with the big official aerial bombs from down in the Roman Forum area plus thousands—maybe millions—of firecrackers, Roman candles, firework fountains and massive private rocket launches from every direction across Rome.  We were astounded at how many rockets were going off, some even from rooftops across from our building and intersections just down our block.  I made a short video which will give you a hint of what it was like.  I should have taken more but I was entranced by the scene, which included many groups around us popping prosecco or spumante corks and eating pandoro in the midst of the joyous din.  Every few minutes there would be a resounding explosion, about like a 5” artillery shell at close range.  [If the video doesn't show up below or won't play, go to this link.]

The city’s show had lots of colorful bursts including about six in a row that exploded to form happy faces.  Toward the end of the program there were a long series in patriotic Italian red, white and green.  But when the official show stopped, the rest of the city kept firing all across our field of view.  We kept watching for half an hour, but finally the cold started penetrating even the thermal underwear. (Cinzia claims that she was even colder one July 4th while watching fireworks in San Francisco.)  The firecrackers continued for hours, but we went home and ate some panettone and drifted off to sleep, happy to have been part of the spectacle welcoming in duemiladodici.

Roberto
Posted by Roberto at 10:05 PM