We spend a lot of time in Rome walking around looking up—at beautiful and unusual buildings and monuments, at vistas across the Tiber or the piazzas, at traffic lights and bus route signs.  But we also must look down for several reasons.  First, unfortunately, is dog poop.  Sad, but what can you do.  Secondly, the streets and marciapiede (sidewalks) are a twisted ankle waiting to happen due to uneven cobbles and lumps and holes of many kinds, so watching where you put your feet is critical.  And thirdly, I like to look for interesting varieties of paving and the odd bit of infrastructure underfoot.

Although for practical reasons many streets and sidewalks have been paved with asphalt or concrete, there are still many areas of pavimenti that are done in cobblestones (ciottoli), and because travertine stone is so readily available, many curbs, borders and stair steps are made from it.  Here are some examples from our Trastevere neighborhood and up the hill on the Gianicolo.  The surfaces are uneven enough that feet get a serious flexing, but the patterns can be beautiful. 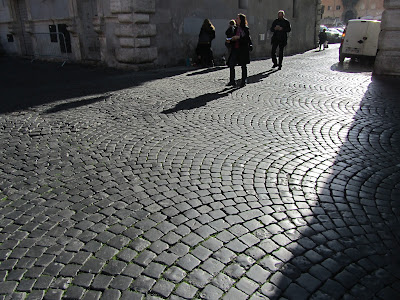 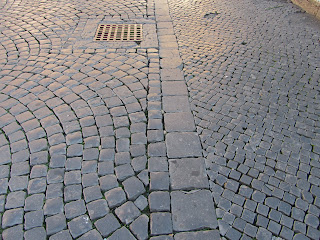 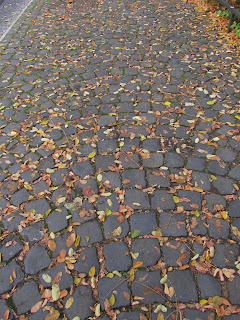 One practical reason for retaining cobble paving is that it doesn’t require heavy equipment to remove sections for access to pipes below.  A couple of guys will pry out the stones, dig out and work on the buried infrastructure, then repack the soil, set the cobbles back in formation and vibrate it all relatively level.   Because it’s almost impossible to get a street cleared of parked vehicles and because the surfaces are so uneven, many times the parking area lines are painted by hand, including the ones in the picture below.  The guys had two big buckets of vivid blue and alarming yellow paint and very long-handled brushes about 3” wide, and they just worked their way down the street leaving motorini and macchine (motorbikes and cars) where they happened to be.  Sometimes a pile of stones will be reused elsewhere, and bits of old road striping will show up as random pixels in the array.

Although Rome’s streets and buildings are not generally very friendly to the disabled (for example, our apartment building has an elevator, but it’s entrance requires a step up then a step down), newer construction does try to meet accessibility standards.   One interesting system to aid the blind is shown in this photo.  There are bands of shallow channels cut across sidewalks and piazzas that lead to crosswalks.  Some crosswalks are also set with special paving as a further guide.  The edges of tram and bus loading platforms have bands of raised dots, but some are made of porcelain tiles and are slick as can be when it rains.  Not to mention loose or missing.

With all the utilities underground, there are lots of access plates, manhole covers and drains made from cast iron or stone.  I first started looking at the iron plates because I noticed that they came from foundries (fonderie) all over Italy and because I thought it was interesting that they all say S.P.Q.R., which is the abbreviation for the Latin phrase Senatus Populusque Romanus—The Senate and People of Rome.   The abbreviation dates from the Roman Republic (100s of years BC) and appears on ancient documents and structures on into Imperial Roman times (a few 100 years AD).  So why is it on manhole covers now?  It was revived in a big way in Italy by Mussolini starting in the 1920s as part of the effort to brand his dictatorship as the new Roman empire, and it has held on to become an official emblem of Rome, being cast, incised, painted or printed on nearly everything from municipal documents to trash cans—and utility access plates. 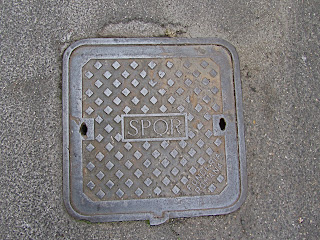 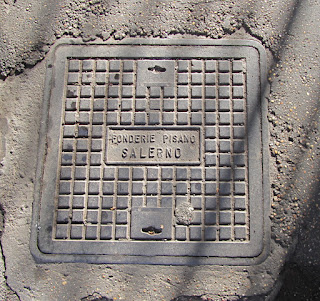 Then I came across some older iron castings actually made during the Mussolini Fascist regime.  The first I found has the SPQR in a sort of art deco/moderne script from the 1930s, and there is also a cross symbol from the same period very much like the Teutonic knight’s cross used for the German military Iron Cross medal.  Later I found a water service (servizio idraulico) valve cover with a fasces as part of the design.  The fasces (Italian: fasci) are an ancient Roman symbol of power consisting of a bundle of sticks bound by red leather straps and with an axe head sticking out.  In old Rome they were carried by attendants of various officials as they moved through the city as a display of their authority.  (Dictators had 24 lictors carrying fasces, consuls had 12, praetors had 2 in the city but 6 in the provinces.) Fasces were adopted by 20th century Italian Fascists as their emblem and became the root of the modern term fascist—which is why Italian cast iron plates from that period may include them.  (Lots of American insignia and emblems also include fasces, including those of various Army units and the National Guard, and it appears on the back of the old Mercury dime.) 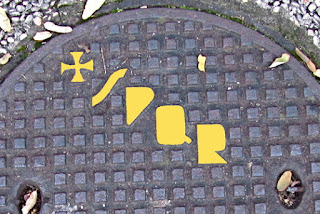 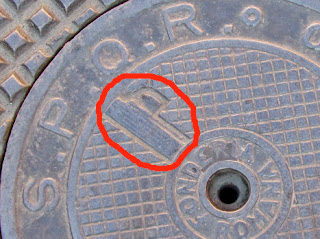 There are lots of unlabeled covers and drains as well.  I love the square stone plug below, which looks as if it could have been in the middle of the street for hundreds of years.  The plain round one is about a meter across (you can see it beyond the travertine bench in the third photo).  It gives access to the voluminous drainage from the Fontanone—Pope Paul V’s self-aggrandizing celebration of his aqueduct restoration project in 1612. 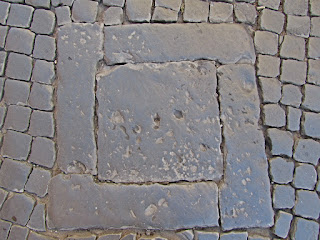 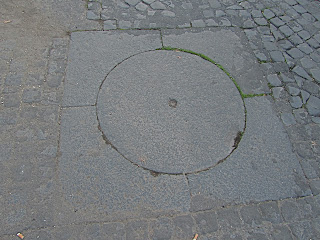 The drainage grates range from simple to beautifully elaborate, in both iron and stone.  The famous Bocca della Verità is said to have originally been a manhole cover, although I am convinced it was actually the rainwater collection inlet in the floor of a temple.  With an opening to the sky like a compluvium or the oculus in the Pantheon, rainwater could be guided to a cistern or holy well. 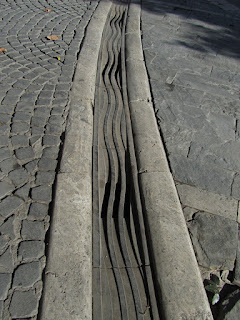 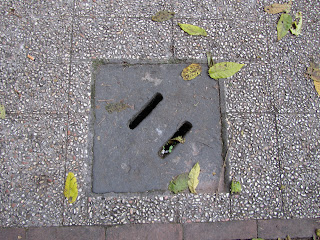 Finally we come to a feature that is underfoot but not generally visible, the ancient Roman cloaca maxima, or Great Sewer, which was built hundreds of years BC to drain the Forum area and the hills that surround it and which still functions as a storm drain today.  The outlet into the Tiber can sometimes be nearly under water, but the place is marked by the large arch shown here (built in the 19th c.), near the modern Ponte Palatino.  The actual outlet is the much older stone construction within, currently rather choked with vegetation and debris.  But if you look down, there it is. 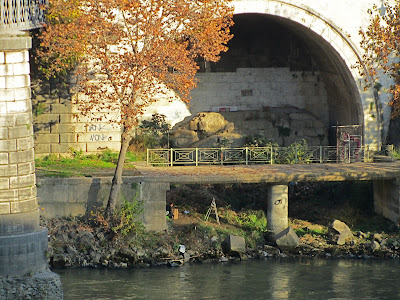 And a final reminder of why I look down when I walk.