The First Week of November in Roma

Someone suggested that I send out some random photos from Rome each week, especially if I haven’t got a more topical episode ready to post.  So here are snippets from last week.

We heard Mozart’s Requiem presented in the church of Sant’Ignazio di Loyola, with orchestra, organ, soloists, and a choir from Germany.  Unlike some church concerts, this one was very well attended, and also unlike some churches, this one has excellent acoustics—just the right amount of reverberation time.  Maybe that’s because the vaulted ceiling isn’t as high as it looks.  The trompe l’oeil painting makes the unusually shallow barrel vault look much higher.  If you look carefully at the left end wall, you can see where the structure really is, just above the window.  The imaginative architecture and characters that seem to float out into space have been surprising church-goers here since Andrea Pozzo created the fresco in the late 1680s.

November 1, Ognissanti (All Saints’ Day), is a national holiday in Italy, and when we went to the expansive and woodsy park of the Villa Borghese we found a great many Romans out for the day, many with children along.   But there were those who preferred the ambience of boating nel lago (on the lake) near the Greek temple.
We had come to the Borghese to see two of the Rome Film Festival showings, but we had time between them to both stroll the park and visit the Galleria Borghese, home to some of Gianlorenzo Bernini’s most striking sculptures.

One of the best things about living here is that we have time to poke around and sniff out great shops and food.  In this case it’s a great food shop, and sniff is exactly the right term.  Here’s a picture inside Innocenti Biscottificio, where dozens of freshly baked varieties of cookies, meringues and the like are sold by the kilogram.  We think this may be one of the best shops we’ve ever found.

We get lots of exercise walking, but to keep everything ticking over properly I try to make a couple of circuits a day up the Gianicolo (Janiculum Hill) from our apartment at its base.  There are several routes, but the one I go up most often has this scala (staircase) at the top.

Near the end of the week we went to our last Film Festival show, this one at the main venue that had red carpets and a fair amount of glitz.  The movie we saw was a French noir thriller called Nuit Blanche—high tension from beginning to end.  Just as we came out of the theatre, we found that Richard Gere and his wife were arriving for a special presentation and award.  I tried for a picture of him, as did the rest of the crowd, but was jostled too much.  But here’s what the scene looked like just before he came into view.

Yesterday afternoon was bellisima.  Here’s Il Fiume, the river, with the small island of Tiburina at the right and the Ponte Cestio connecting to Trastevere on the left.  The bridge is named after the ancient Roman Cestii family that built the original version of it in the 1st century BC.  This one dates from about 1892 when the massive enclosing concrete walls were built along the Tiber to control flooding.  A couple of weeks ago when Rome had its nubifragio (cloudburst), the river covered the walkway around the island and lapped at the bike path. 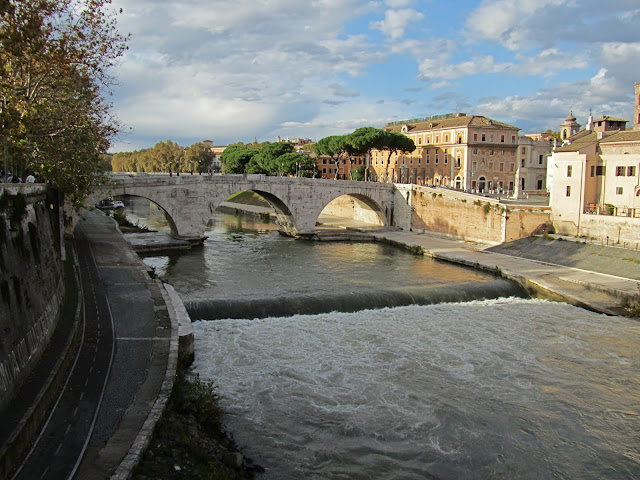