Alert (or compulsive) readers of this journal will have noted that although Permesso di Soggiorno, Part 1, appeared back on June 6th, no further news on this topic has been posted.  Allora, here is the rest of the story.  If you’re not trying to get a permesso yourself, you may find this all rather tiresome., but someone may care.

To recap, we had sent off sheafs of documents by registered mail using forms in the permesso kit obtained at and then submitted through the post office.  We had been given special coded receipts as temporary permessi along with appointments for further processing at the Questura [police headquarters] office of immigration for June 24th.

Part 2.  June 24th.
We had seen the Bologna Questura near Piazza Maggiore in the center of the city, an imposing building with an always-crowded lobby, and had assumed that that was where we would go for our appointments.  But our papers sent us instead to a rather forbidding walled compound at via Bovi Campeggi, 13/3, out near the train station: Ufficio Immigrazione della Questura di Bologna.  The place was teeming with people like us, immigrants from all over the world trying to follow the rules.  There were children playing in the courtyard, men lounging around, and always anxious newcomers in the waiting room puzzling over what exactly they were supposed to do. 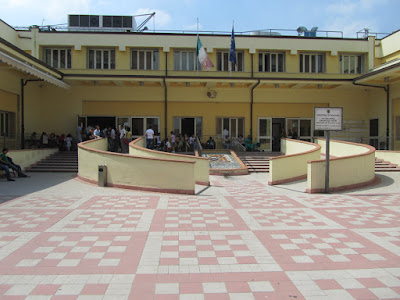 Why were they puzzled? Because there were no instructional signs, only an abundance of closed doors, and because many, maybe most, could not speak Italian well enough to even ask each other questions, a veritable Babel.  Now and again an official would come out of a door and disappear through another, but the most any of them would say was to wait.

Our appointments were for 10:24 and 10:28 a.m., which seemed pretty precise.  As the time approached we got more nervous, afraid we’d miss our alloted times due to being in the wrong place.  But, as sometimes happens with Italian bureaucracy, if you wait long enough things work out.  In this case, a man emerged from a door and started calling out numbers: nine one eight, nine two two, nine two six... and so on, about ten sets.  But there were no numbers on our appointment papers.  Cinzia finally asked and found that the numbers were the appointment times, 9:18, 9:22, etc.  So they were about an hour behind schedule, and we had no choice but to wait...and watch new arrivals go through the same confusion and anxiety we had.

When our turns finally came we were herded through a short hallway into a small inner lobby with five or six sportelli—something like box-office windows.  One by one we had short interviews where our passports and other documentation (all the originals of the copies we had mailed off weeks before plus several passport-style photos) were reviewed again and fingerprints taken—all ten fingers using a digital scanner.  While I waited for my interviewer I watched as workers in the room behind carried stacks of files from here to there.  Everywhere were piles of folders, each presumably someone’s laboriously compiled documenti to be reviewed again, approved or not, filed or sent elsewhere, on and on and on.

Some applicants were sent off to get more or better photos (an entrepreneur had set up one of those self-service photo booths across the street), some to bring copies of work papers, and a few, like us, were sent to another outpost of the Questura to have even more fingerprints taken.  This little office of the scientific and technical branch of the police is tucked away near the city center on via Volto Santo.  Unlike the other venues, there were only a couple of people waiting.  Two women were taking the digital prints on an elaborate machine, including palm prints this time.  I can’t imagine why they wanted them.

Once done with the fingerprint women, we went away with nothing:  no indication of what would happen next or when or if we should do something more.  No address, phone number or website.  Nothing except the original receipts from the post office with their various codes and numbers, which were our temporary permessi di soggiorno.  We assumed that something would come in the mail, and based on other experiences we’d read, we thought maybe a month would go by first.  We were wrong.

Part 3.  August 26th.
When two months had gone by without further word, Cinzia started delving into the Internet, poking into hitherto unseen corners, looking for contact information or a help line or something.  What she eventually found on the Polizia di Stato site was an online form where one could enter the code numbers from the special receipt and get a response showing the status of that application.  Amazingly, she found that mine was ready to pick up—though hers was not.  It was not obvious exactly how to proceed, but after a fruitless return trip to the forbidding compound, where the only sign said, effectively, “Pick-up By Appointment Only!”— we eventually found a web link (on the Bologna Questura site) to an appointments page, and, astoundingly, I was able to go the very next day.  (Note: the appointment page must be printed in Italian and taken with you.)

So at 10:30 a.m., August 26th, I was hopping off the “A”-line bus out on via Bovi Campeggi.  The scene was much the same as before.  People waiting for their first appointments were mystified, and the appointments were running about an hour late.  Those of us there to ritiro  (retrieve) our permessi waited for word from a different door and were only half an hour behind.  About ten of us at a time were called into another room with yet another sportello. I surrendered my appointment sheet, coded receipt, and passport and waited.  Behind the glass could be seen dozens of open bins full of buste (envelopes), apparently sorted by dates.  Eventually each of us was handed our precious Permesso di Soggiorno.  Here’s mine.  It has electronic circuity built in and came in a foil-lined envelope.

Part 4.  September 20th.
We were sure that Cinzia’s permesso couldn’t be far behind, especially with the August holidays over.  Wrong again.  When the on-line status continued to show hers still in process 10 days later, she started a new and deeper web search.  After many frustrating dead ends, she finally found an e-mail help link in the Bologna Questura section of the Polizia di Stato site that yielded a prompt and personal reply saying that the card had been produced and shipped and that it would be ready in a few days!  Hurray!  And so it turned out.  This afternoon, about 3-1/2 months down the road from when we submitted documents, the loop finally closed, and Cinzia got her Permesso di Soggiorno.  (The least useful site we consulted was for the Portale Immigrazione.  The status page there never did show any progress for us, and the toll-free information phone number connected to a singularly unhelpful woman who just said to go to the Questura.  Did I mention that you can’t call most toll-free numbers from cell phones here?  We had to borrow a land-line phone.)

Maybe the path is faster in other cities; I don’t know.  I have heard that not too far in the past it could take six months here, and I’m pretty sure that the recently adopted system of applying through the post office with a kit has improved things.  But my, oh my, they could ease so many worries and smooth out visits to the Questura by including a single sheet of instruction and advice with that kit, along with web addresses and an outline of what to expect.  From our experience we advise starting at the Polizia di Stato site, and go from there.  Surprisingly, the English language version of the site seems to be better organized and have clearer information than the Italian pages.  Once the status shows the permesso is ready, click on Le Questure sul web, choose your city, and look under servizi in the right column to find the exact process and to make a ritiro appointment.  Again, the English versions are quite different and much more useful.  The exact procedures vary by city.  This worked for us in Bologna; your mileage may vary.

I wish I could say that we’re now through with Italian bureaucracy, but with eight more months here, I’m sure that’s not the case.