We spent  most of a day at the Ostia Antica archeological site last week.  It is next to Rome’s Fiumicino airport near where the Tiber River flows into the Mediterranean. (Ostium = mouth in Latin)  Ostia was the port city for ancient Rome, but changes in the course of the Tiber, centuries of flooding, and population shifts partly due to malarial swamps left the coastal city abandoned and largely buried in mud by the time of the barbarian invasions (6th century A.D.).  Although exposed marble was harvested to decorate medieval cathedrals in Orvieto and Pisa and Baroque-era churches in Rome, much of Ostia was left undisturbed until modern times; so in some ways it is like Pompeii without the volcano.  Many mosaic floors remain beautifully intact.  Wall frescoes are still visible here and there, but because this was a working-class city there are few of the big, heavily decorated domus houses found in Pompeii.  Instead, most inhabitants lived in four-story insulae, or apartment blocks.   Though most buildings are now roofless, some multistory examples are still standing, having lost only the top floor or two.  When modern archeological work began there, what was missing compared to Pompeii were the furnishings and belongings of the inhabitants, since they had simply moved away, not been trapped in a sudden volcanic burial. 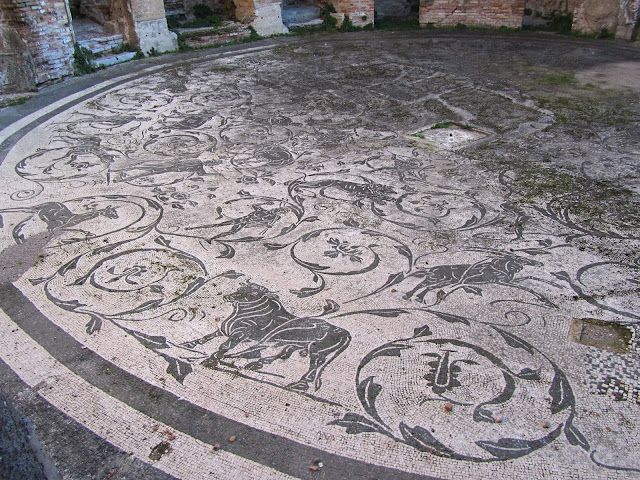 But in some ways Ostia Antica is a better place to visit than Pompeii.  For one thing, it is easy to get to and inexpensive to visit.  The train from near the Piramide Metro B stop in Rome costs only a bus ticket to ride (currently €1 = $1.32) and takes only 30 minutes; access to the archeological park is only €6.50. 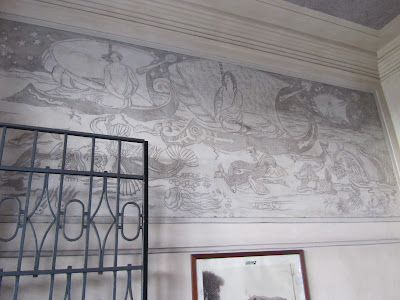 “Park” is the right term to describe Ostia today.  The ancient city had about 50,000 inhabitants, so it covered a lot of territory.  Today the exposed ruins are set off by a pleasant scattering of iconic Roman umbrella pines and cypresses, and, aside from a few modern roads and incursions, the unexcavated fields are currently dressed in green winter grass. 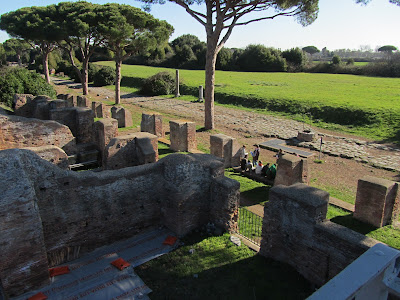 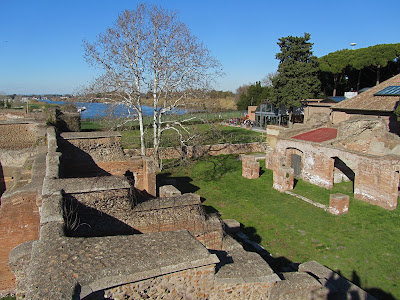 One reason we visit recovered cities like Pompeii, Herculaneum and Ostia is to visualize what life in ancient times was like.  Ostia is good for that because many of the buildings are still tall enough to give a 3-D sense of space.  The large theater, the temples around the forum, some of the bath complexes and the multistory apartment insulae help define the volume.  And several of these have viewing platforms at their highest points making the city layout and scale comprehensible. 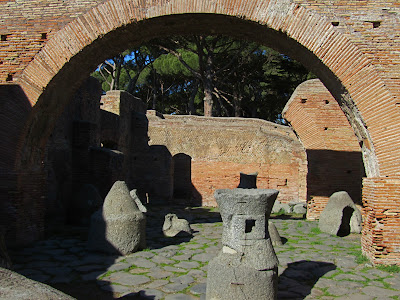 Ancient Ostia was an extremely busy port.  Food, manufactured goods, and raw materials rich and mundane came ashore there.  Just beyond the theater is the large Piazzale delle Corporazioni, or Plaza of the Guilds.  Around the perimeter were the front offices of trading companies and guilds, maybe 70 or 80.  What remain today are the black and white mosaic pavements that advertised the trading specialties.   Many were ship outfitters; others were dealers in grain from Africa, Sicily and Egypt to feed the hungry Romans.  A few dealt in exotic animals and valuables like ivory. 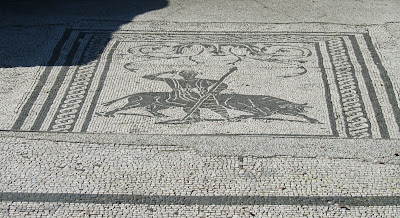 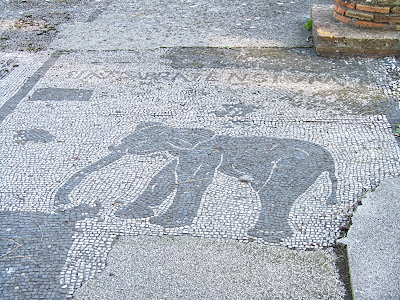 Like other Roman cities of its time, Ostia had a wealth of bath complexes, both public and private.  The large Forum Baths still have several of the spacious soaking and bathing pools in place, though with most of the marble linings having been scavenged by barbarians, openings have appeared into the heating chambers below, where slaves stoked wood fires.  Broken walls reveal terracotta ducts within that carried hot air from below to keep the public spaces warm.  Some of the smaller baths in Ostia were owned by individual guilds making them a bit like country clubs for the working class. 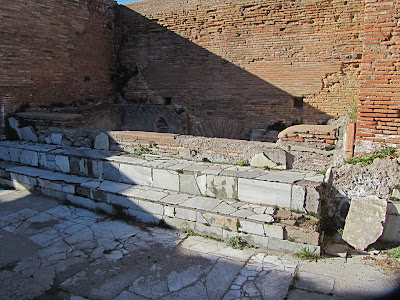 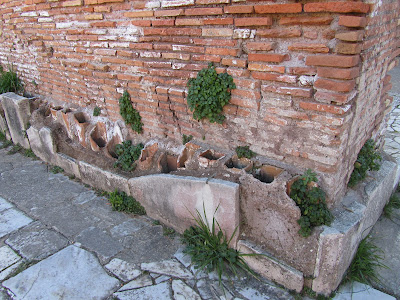 The descriptive signage and maps posted around Ostia Antica are excellent (in Italian and English), but we also had fun exploring the many unmarked features.  The whole park is remarkably open despite necessary barriers around fragile art and structures.  You might find a surprise mosaic floor, or a steep stairway leading to upper stories and rooftop views, or even a subterranean temple of Mithras.

Despite spending the whole day there, we didn’t see it all, not even all the best features, so I’ll be going back later in the spring.  Maybe some of the large floor mosaics that were covered with protective tarps during our visit will be revealed then, though I’ll understand if they aren’t.  It’s a difficult choice between making the ancient artwork available and delaying its inevitable decay by hiding it out of the weather and away from depredations by careless visitors.  In some areas we came across painful examples of how hard it is to fight entropy—the relentless tendency toward the simplest state of being—with black and white floor mosaic tesserae crumbling off into the dirt.

With luck you’ll get to Rome and Ostia Antica before entropy has its way and everything crumbles to dust. 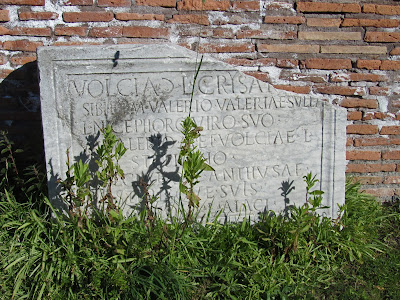