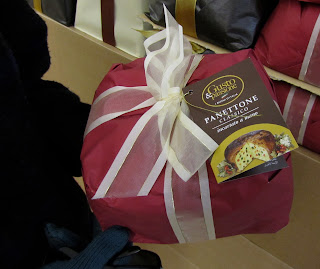 One of the ways that we knew Christmas was coming this year was the appearance of panettone and pandoro boxes in every food store in Rome.  Both are traditional sweet Christmas breads, and while they started as regional specialties (panettone from Milan and pandoro from Verona), they are now popular throughout Italy and indeed throughout the world.  (In case you were wondering, panettone is pronounced pan-eh-TOE-nay.)

Both are made from a yeast dough rich with butter, sugar and eggs; long, slow rises contribute to their flavor and lightness.  The classic panettone is round with a high dome and is studded with candied citrus and raisins, though nowadays you can also buy them with chocolate bits, flavored with Grand Marnier or some other liqueur, or in some other way gussied up. The classic pandoro is a light vanilla cake-like bread baked in a tall star-shaped mold and then dusted with vanilla sugar for serving.

There are multiple stories about how panettone got its name.  The least romantic is that it comes from panetto, which means small bread, plus the suffix -one which means large. Hence, panettone, large bread.  Some sources say the name came from the Milanese pan di tono, which means luxury bread, and with its rich dough and costly ingredients, it would definitely qualify. 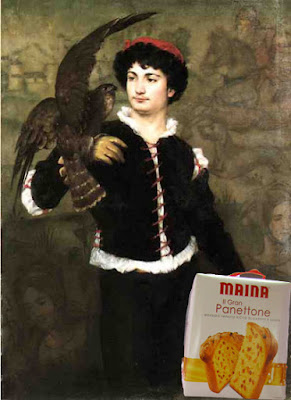 A falconer, Ughetto, wanted to win the heart of Adalgisa, the daughter of a poor baker named Toni. He began helping Adalgisa in the bakery and came up with the idea of enriching the bakery's bread with butter, sugar, eggs and fruit.  The bread that they developed was very popular and became known as "pan di Toni" or Toni's bread.

In 15th c. Milan, Duke Ludovico was giving a fancy Christmas party.  When the cook accidentally burned the dessert, a young scullery boy named Toni saved the day when he offered the bread that he had made from the leftovers of the cook's dessert.  The guests loved the bread, which became known as "pan di Toni" or Toni's bread.

We have always loved panettone, so it didn't take much to convince us to buy one here in Rome.  The hardest part was choosing which one.  There are dozens of different brands, with prices ranging from under 5 to over 20 euros, and they all look appealing.  Our first panettone here was from Sapori di Siena, and it was delicious.

The Sapori pandoro was also excellent, but stood still long enough for pictures.   Most pandoro comes complete with a packet of powdered sugar (zucchero a velo) for dusting. 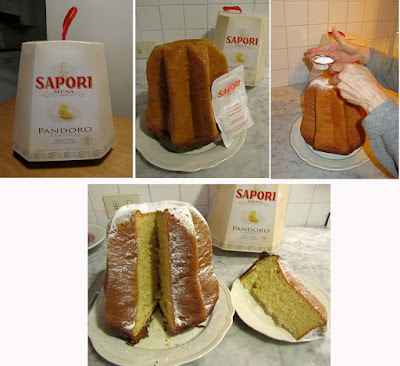 Of course, in the interests of research we feel we should try several others while we have the opportunity.  We're not sure how many we can squeeze into one Christmas season, but we'll give it our best shot.

For those of you who like a challenge, it is possible to bake panettone and pandoro at home.  In fact, we did just that a few years ago using a panettone recipe from Jim Lahey, the owner of Sullivan St. Bakery in New York City. We produced a pretty authentic loaf, but the dough was fussy and it took two days, and since in California we have excellent fresh panettone year round from La Biscotteria in Redwood City, we decided it wasn't worth the trouble.  Epicurious has a simpler but well-reviewed recipe for panettone that might be worth a try.  The Italian food blog Mangia Bene Pasta has an informative article about pandoro, complete with a recipe, but we haven't tried making it.  You can find panettone baking papers at good cookware stores, like Sur La Table, or online at King Arthur Flour.

Cinzia
Posted by Roberto at 3:46 PM